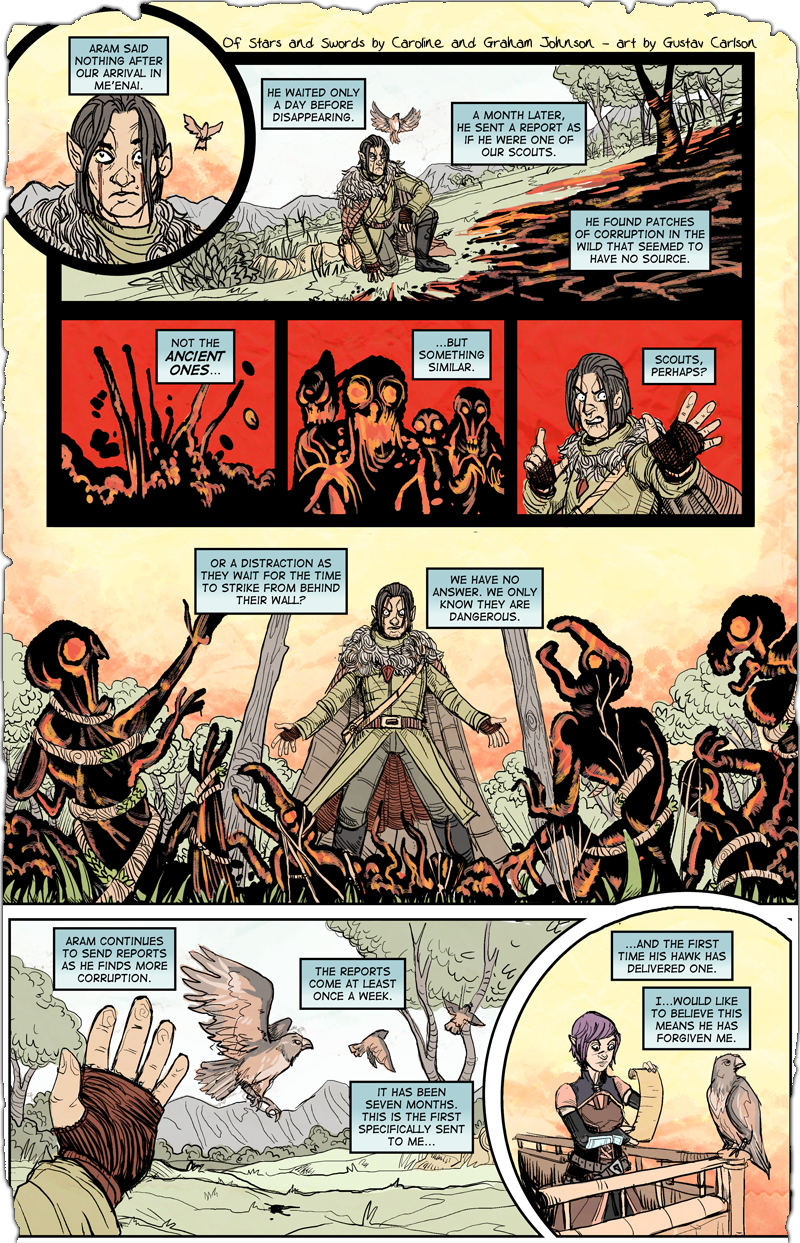 I know it’s been a while (a little over a year!) but we’re back for two months of very special updates. While we’re still in the early stages of developing Of Stars and Swords Volume 2, we didn’t want to keep you all waiting for new content forever, so we decided to do something we hadn’t done before: Guest comics! For the next couple of months, we’ll have some of our friends doing one page comics for Of Stars and Swords, all of which will serve as a small way to bridge the gap between Vol 1 and Vol 2.

First up, we have Gustav Carson catching us up with Aram. Gustav is a great dude and also has a brand new issue of his comic, Tourist Unknown, on sale today on Comixology! He’s also on Twitter as @BackwoodGoat, and if you follow the both of us I apologize in advance for the amount of yelling at each other we do. Gustav’s also got a Tumblr where he posts a bunch of wonderful and weird in progress stuff. Go check out his stuff!

Next week’s page will catch up with another of the old cast members, but until then there have been other things happening in the past year. The BIG thing related to Of Stars and Swords is we released the digital collection for Of Stars and Swords Vol 1. Not only does this contain the entirety of the comic’s first story, but Caroline also went back and updated a great deal of the early art and colors. This collection is the ONLY WAY to get the newer art, plus it’s a great way to support us continuing to do this if you can.

We haven’t been doing nothing this past year. In fact, we’ve been working on a collection of scifi short comics that we’ll be releasing next year. One of them, however, is already out! The comic, Gemini 13, is about a Gemini mission in the 60s that never happened. It’s currently available as part of the digital comic anthology Stuck in the Gutters #2. It’s pay what you want, so please go check it out if you’d like to see something a bit different from Caroline and I as a preview of things to come!

That’s all for now. Thanks for bearing with us in the break between Of Stars and Swords Volumes and we hope you enjoy the rest of these pages!