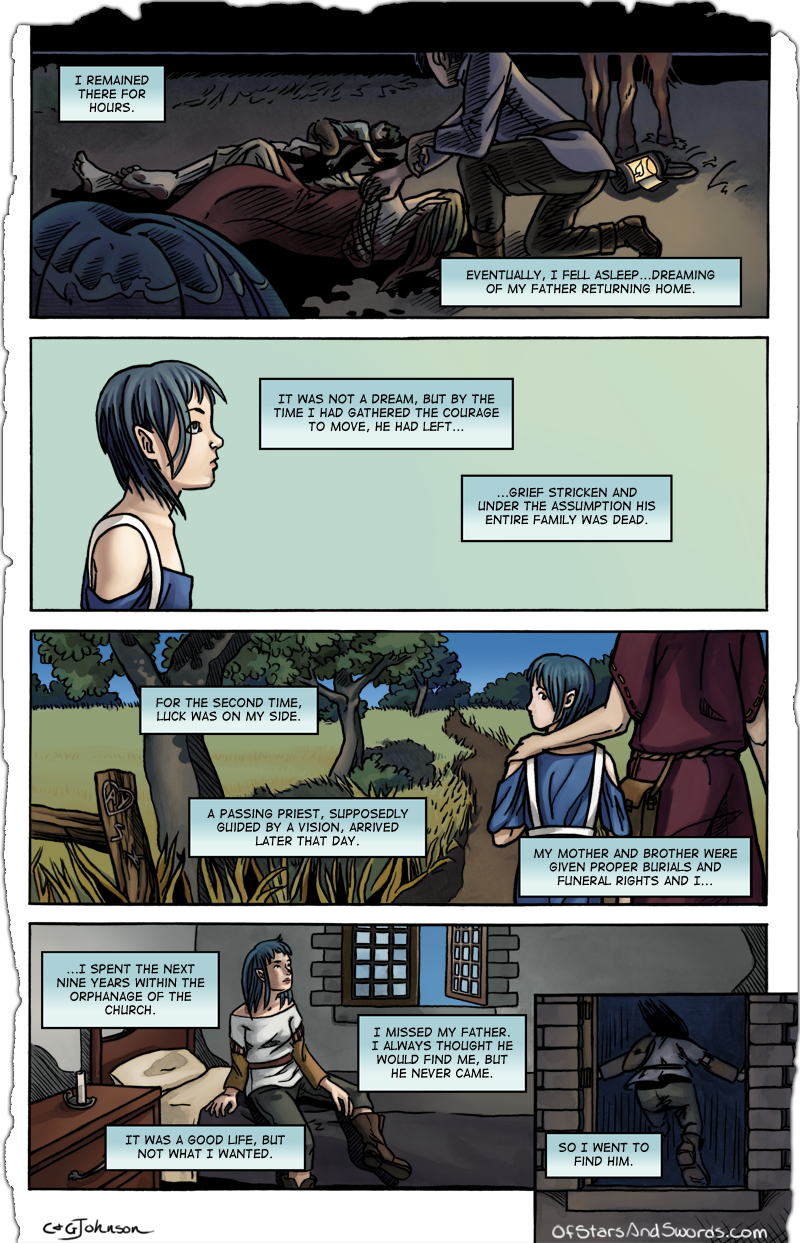 An excerpt from Peoples and Civilizations, compiled by Janus Sevrous, scribe of King Devis IV, u.178

In many ways, the Elves of the West are curious creatures. As our people have only had limited peaceful interaction in the past sixty years, details on their culture are scarce. I shall do what I can to place here all the information we currently have on the Elves as a people, both individuals and as a society. My hope is that this knowledge will lead to better days and more understanding, but I am not a fool, and it is never a failing to know one’s enemy. 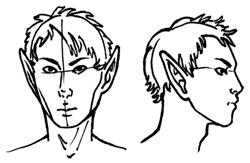 Physically, Elves are quite similar to us. The males tend to be, on average, taller than the average Human, while the females average only slightly shorter. Both genders are slight of build, on the whole. They are a race built for swiftness and speed rather than brute strength, yet that does not mean they are all weak.

There is the obvious difference in the construction of the ear, with Elf ears coming to a rather large point. Also of note, and often overlooked, is that Elves generally have eyes that are larger than the average Human’s. Together, these two differences are apparent through heightened senses, with at least some ability for Elves to see in the dark. Other senses, too, seem to be keener than our own. Specifically, touch. I have seen an Elf touch a small indentation in a tree and determine the exact size of the blade that made the cut.

Beyond these physical differences, there is one other worth noting. Elves have an extremely long lifespan, so long, in fact, that I can find no record of an Elf dying of old age. They are not immortal, but one must wonder how long a single Elf can live and if, in fact, their claims of being the First Life are true.

Culturally, we know very little of them compared to other creatures we have encountered since our arrival in this land a hundred years ago. Arriving in the south, the first Men to set foot on this land did not find any Elves for many years, instead finding the smaller Halflings and Dwarves, both of which were happy to trade and offer land. But when these first Men encountered the Elves, it was war.

Various reasons have been recorded for why the war began. King Sevrous II, leader of the first Men to arrive here, recorded his account clearly enough. According to him, a group of strange, Human-like creatures came in the night, killing a group of farmers at the edge of the settlements. The only trace left expertly crafted arrows and the bodies. No trace of the attackers could be found anywhere nearby, nor for miles around. It was not long before another attack came, and this time, one of the attackers was captured. The first direct contact between Sevrous II and the Elf captive did not go well, neither of them speaking the other’s language nor caring. The prisoner was executed swiftly and his compatriots tracked to the West. When a small Elf settlement was found nearby, Sevrous ordered it razed.

Unsurprisingly, this led to war.

For fourty years, Man warred with Elf, neither gaining any true advantage. For while the Elves had strength in their knowledge of the land, they were arrogant and thought that Men were children playing at bloody games. This was not true, and it was a vital mistake to make. Sevrous and his people had traveled the sea from the south for decades, hardened and ready to defend any land they could find with their very lives. This determination, along with great military minds and strong magics, was enough to bring the war to a stalemate.

A truce came, finally, when the son of King Sevrous II, known today as Valin the Brave, met the Elf King, Tyriel, in battle at the Narrow River, just outside the Elven fortress of An’Adeth. Valin, with an army half the size of Tyriel’s, had fought the Elves to the very outskirts of their kingdom. An’Adeth and the Narrow River were all that stood between Valin and conquering the entire western half of the continent, the heart of the Elven lands. But, as the two armies prepared for battle, an odd thing occurred.

A rider, flying a flag of peace, sprinted across the field to Valin’s army. Valin had the foresight not to have this rider killed on sight, and was presented with a letter written in his own language, perfectly presented and in the hand of Tyriel himself. The Elven King offered peace, complimenting Valin on his leadership in many battles that brought his army to where it stood, the foot of Tyriel’s own doorstep. Tyriel proposed to give Valin and his people all the lands to the east of the Narrow River, so long as they did not venture to its west. 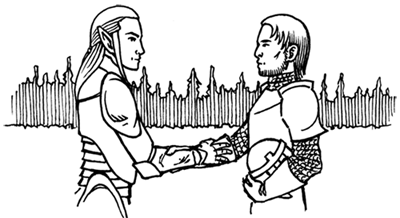 Valin was a wise man, young as he was at the time. Where many would see cowering in Tyriel’s letter, Valin saw wisdom and strength. It took a strong man to know when to yield, and the lands East of the Narrow River were more than enough for Valin’s people, even shared with Halflings and Dwarves. Thus, the terms were accepted and the two Kings met alone in the center of the battlefield, not to fight, but to formally end the conflict.

In the sixty years since the peace, we have lived well. The Elves have not ventured East, leaving us to do as we wish. But times are changing. Though Elves are long lived, Men are not. King Devis will soon send a small group of priests and wise men to An’Adeth, hoping to find more than just silence from the Elves. With sixty years of tension, I, too, agree that it is time to offer a hand of cooperation, rather than no hand at all. Perhaps we shall even learn more about these mysterious creatures to the West. If the rumors of their long lives are true, much could be learned from these Elves.