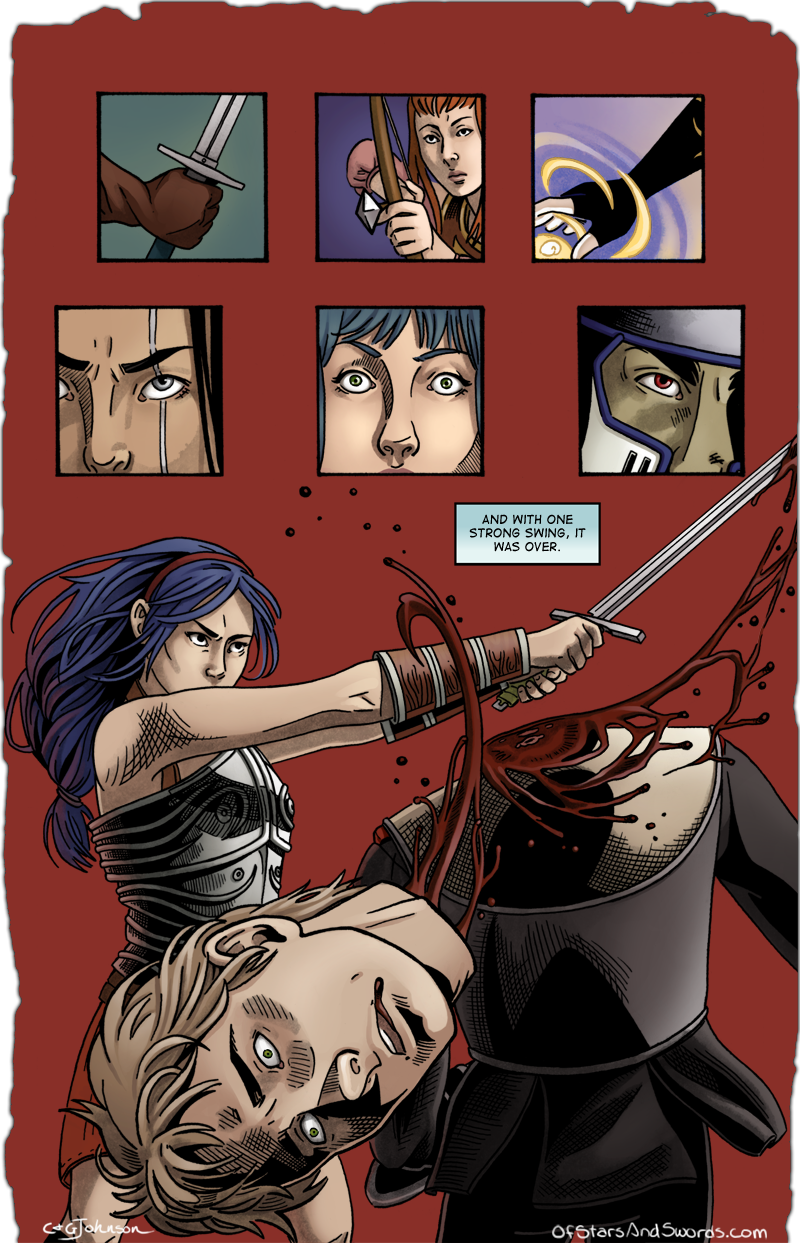 Hey everyone! This is Graham with a quick couple of things to say before the usual world-building blog post that occupies this space.

So first up, we got a mention from Kate Beaton (of Hark! A Vagrant) and have been pulling in a ton of new hits thanks to that. So hello to all our new readers, and I hope you stick with us!

Second! We have a Facebook page now. It’s listed right in the sidebar and we’ll be putting some extra thoughts and various other bits and pieces that might not appear on either our art blog or Caroline’s deviantart page.

And finally, today’s page is a big one in more ways than one. We have now hit page twenty! And that, by our measure, is the end of the first issue. Our prologue is now done, and next week we’ll be starting with the real meat of the story! So here’s to hoping you enjoyed this Issue 0, as we call it, and are good and prepared to see where we’re going to take things for Seren.

Planning the Assault, notes taken from a meeting of the Dorae-Kos, u.1375

For the past week, we have been in communication with the forces of Me’enai to the west. The Elves are as nervous with Helmund’s advances as we, and have agreed to work with us in retaking the land from him. The support of a larger army will be essential in removing Helmund from power, especially now that his forces are already solidifying their power in many cities and towns.

With this in mind, we have chosen our first target: Arvon. It is a relatively small city, but the first of any significance between the rest of the land and Me’enai. Taking Arvon would provide a safe route to the rest of the occupied cities and is our best bet for an initial strike.

The strike will, however, require a deft touch. We will send in a small group to weaken the defenses from inside the city and hold it for the day it will take Me’enai’s advance army to reach Arvon. We know that the city is well occupied by a force of Helmund’s army, but contacts already within the walls have assured us that we will find assistance in the form of the old town watch.

To this end, we must strike the city at multiple points simultaneously.

The two most important targets that must be dealt with swiftly will be the Guard Barracks and Arvon’s Gates. Thus, here is what we shall attempt to do.

Once our agents are all within the city, we will organize a small, but substantial riot in the outlying farms. With the cooperation of just a few local militias, we can use this to draw out a large portion of Helmund’s men within Arvon.

One small team will head for the Guard House with an adequate amount of alchemical fire. When many of the guards have left the city to deal with the riot, the weapon will be ignited and the explosion should draw the attention of all the guards that remain in the city.

The use of the alchemical fire will be the signal for two other teams, one at each of Arvon’s Gates, to force them closed. The mechanisms for such an action are fairly simple, though constantly under guard. The explosion of the Guard House should be enough, however, to draw most defense away the Gates and provide easier access.

With the gates shut and sealed, the groups within the city will move inwards towards the Guard House, dealing with any of Helmund’s forces on the way. At this point, the former Town Watch members will join us in taking control of the other major points of the city.

Once the interior is dealt with, we must hold the walls. It is unlikely that the guards that leave to deal with the outlying riot will bring ladders, but we must be prepared. If we must arm Arvon’s own people to keep the wall clear of Helmund’s men, we shall.

And at that point, the city will be ours. We only need to hold it for a day if all goes well. After which, the Elves will arrive and assist us from there. With their help, we should have Arvon firmly out of Helmund’s control and safe long before the Mad Lord even learns that it has been lost.