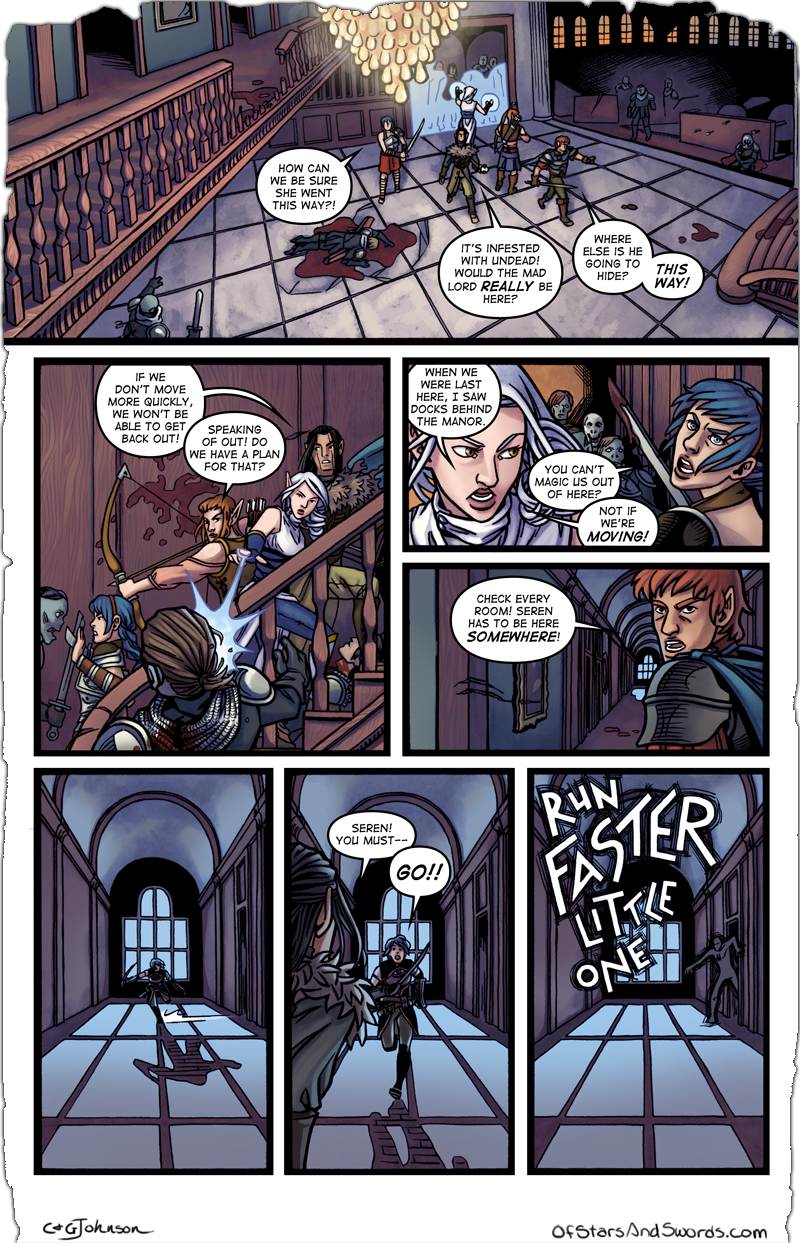 We’re back! Finally! Our apologies for taking so long to return, but between HeroesCon, moving, and a few other life things it’s been insane. But we’re back at it now!

Back at it just in time to see the rest of our heroes have little trouble finding Seren. Of course, there are certainly far more problems with their entrance than Seren had. It looks like whatever’s going on with all these undead is spreading fast. Never can make it easy, can we?

There are only FOUR PAGES LEFT in Issue 5, which will also be the end of our first story arc. After which, we have plans. There will be a break between the end of Arc 1 and the start of Arc 2. We’re not prepared to say how long, though. In between, we’ll be posting a short Of Stars and Swords side comic here, and likely working on a couple of separate short comics as well, just to stretch some different muscles before getting back to this. Cato’s Story will ALSO be finished either around the time of the end of Arc 1 of the comic or very shortly after.

We will ALSO be posting concept art and other teases for Arc 2 during this time. In fact, we’ve already posted a couple of character concepts for new characters that will join the comic in the next arc! We showed off designs for a pair of characters from Cato’s Story, the Elves Kieran and Maeira, back in March, and while not saying at the time, we’re  happy to say now that they’ll be part of our main cast starting with Arc 2! And they won’t be alone!

During this recent time off, we posted a character design for another character that will be coming to the comic…Cato! At this point, it might be easy to guess a few other members of Arc 2’s cast, so keep an eye out for more designs as time passes!

Remember, the best place for updates and general goings is either of our Twitter pages (linked on the sidebar with our faces!) or on the Facebook page (linked right below the Twitter button). I’m also now on Tumblr, where I’ll also post updates, preview art for Of Stars and Swords AND other comic stuff we might be working on, along with all the other usual crap you’d expect on Tumblr.

Finally, a reminder of the ways you can catch up on the comic and/or buy it in digital form to have elsewhere/support us if that’s your thing! The sidebar buttons labeled for each Issue link to the start of each, so it’s easy to jump to where you need to be if you’ve started reading from somewhere else or just want to keep your place! Also,  you can get ALL of the completed Issues, 0-4, on Comixology, optimized for tablet and phone reading through their app! If you prefer a DRM-free PDF, you can get that from our Gumroad store, which is also set up on a pay what you want system (with a minimum price).