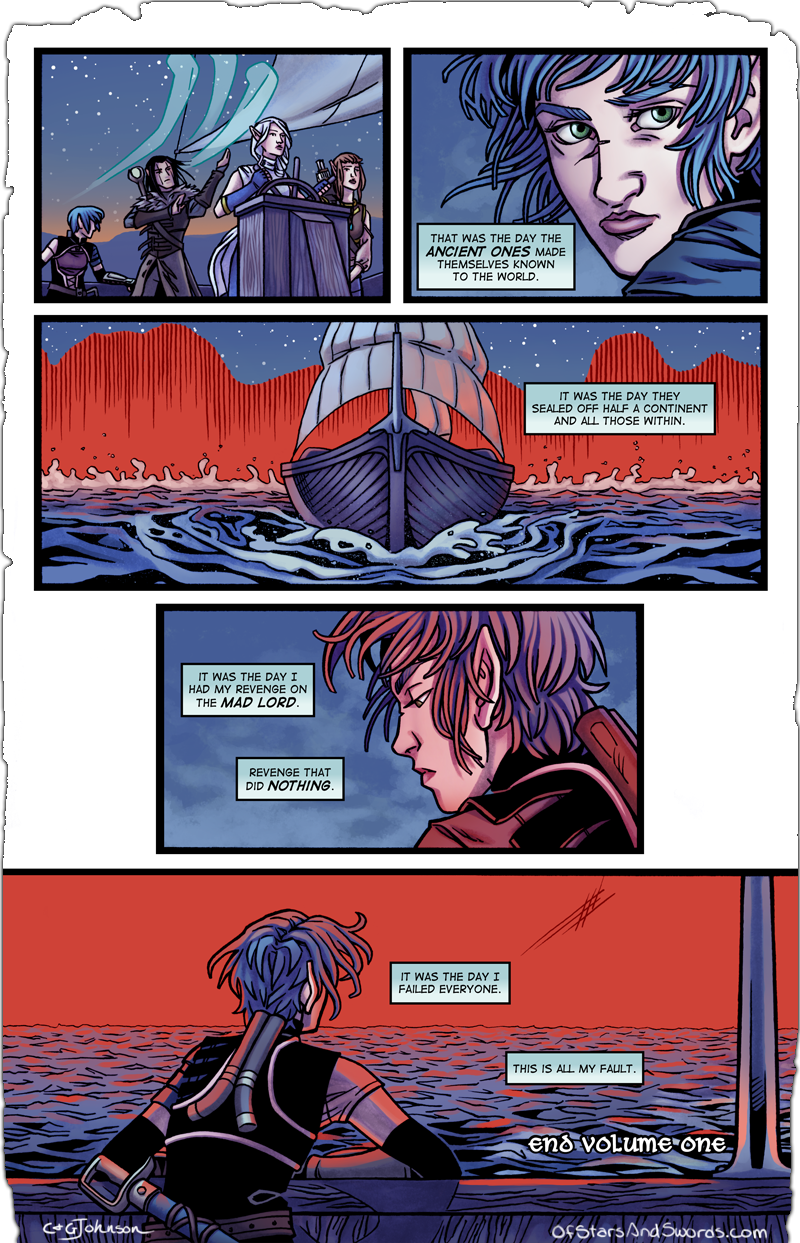 Or rather, as the phrase “End Volume One” implies, that’s it for a little while. I have a lot of things I want to say about the story and where we’re leaving it and Seren, but that’s going to wait at least a few days. Keep an eye on our twitter feeds and such as I’ll be doing a long form thing on that.

But not right now. Right now, this is the end of our first story. This is always where we planned to end and it’s still a little surreal to actually have reached it. So first off, thank you for sticking with us for these first 131 pages. It’s a hell of a thing.

Second, this is not the end! In the next few weeks, there will be a 4-page short comic that will run here on the site and tie some pieces we’ve left out of view together as well as setting up some bits of where we plan to go next. After the short is done, the Issue 5 cover will hit and then we’ll be taking a break.

We can’t tell you how long the break will be because we don’t know yet. During the break, we’re going to be doing a few things. Primarily, we’ll be putting together a series of scifi short comics that will become a little anthology of its own. This won’t be a webcomic, but will definitely be released digitally as soon as we can get it good and done. All the while, I’m going to be nailing down the next Of Stars and Swords story. I already know where it ends (I start with endings) and where it starts AND who will be joining Seren, but the middle bits are still coming together. But by the time we’re done with the scifi anthology, it will be ready for Caroline to start drawing Of Stars and Swords again. We’ll do our best to build up a nice buffer again, then things will be back to weekly! Oh, and we’ll be doing a few one page Of Stars and Swords shorts to lead INTO the second story just before it kicks off.

In the meantime, Cato’s story on the Prose site is nearing it’s own ending. We’re not quite there yet, but it will be done by the time the Issue 5 cover goes up. And speaking of that, there’s a new chapter up!

Remember, all of our completed comics are on Comixology! And now Issues 0-4 on Comixology are COMPLETELY DRM FREE! So if you’ve bought the issues there, you can now download a backup copy of the issue for reading outside of the Comixology app in PDF or CBZ form. As always, if you want to buy through our Gumroad store, that’s still an option and they continue to be DRM free as well! Issue 5 will be released not long after the cover (so, it’ll be a few weeks). We will ALSO be putting together a digital trade, which will include the short comic (Issue 5’s digital release won’t) and that will be coming out not long after.

FINALLY, the best place to keep up with us is on Twitter. Just click on our buttons in the sidebar to find us. Since there’s still a short comic and a cover to come, these blog posts will continue to do the usual weekly(ish) updates as well.

So once again, thanks for going on this ride with us. We’re not done yet and I’ll be talking about this story in more detail later, but for now, we hope you’ve enjoyed this first story. Hopefully more than Seren, at least.