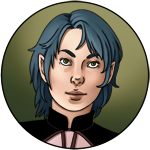 Seren – Young, stubborn, and sure of herself, Seren is always alert and on edge. Trusting only a select few individuals, she prefers to work alone and finds others distracting at best and, more often than not, useless. Despite this, she has a firm grasp on right and wrong and will always attempt to do what is best. 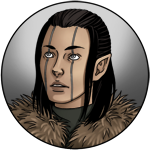 Aram – He is a part of the land itself. Aram is very cautious and quiet, happy to assist others rather than lead the way unless he sees something is forgotten. He strives to remove the world of the evil that defiles the land, despite knowing the impossibility of this task for a single individual. But Aram knows that he is not alone, and is firm in his belief that others will always be there to assist and fight alongside. 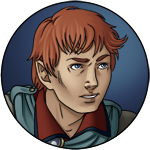 Barstof – There is little in life that Barstof requires beyond beer, women, and fighting. The first to dive in, and generally the first injured because of it, Barstof is headstrong to the point of foolishness. But where many would have died long ago, he has not. He is a skilled fighter and has made quite a reputation for himself simply by surviving situations that no one truly should. 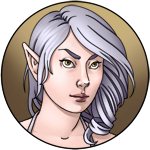 Marguerite – Slight of build and fair of complexion, Marguerite’s appearance belies her true nature. She is a master of the arcane magics and has a spell for anything one could ever need. She has a keen eye, preferring a precise application of her skills rather than rashly throwing spells in every direction. Even outside of battle, she is rarely without the use of her magics. Many a thief has found himself returning the items he has stolen, unsure why he is doing it but unable to stop, thanks to Marguerite. 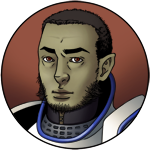 Baldur – A Half-Orc, Baldur is a man of the cloth. Despite his formidable appearance, he is intelligent, calm, and selfless. He believes firmly in saving lives and doing what is right, and never lets anything stand in the way of that. Baldur is a natural leader and a man that would rather be on the front lines than hiding in the back, ordering men to die. 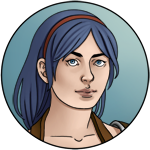 Chloe – A warrior from the forests, Chloe wields a blade larger than most men with ease. She prefers action above all else and thus has difficulty with any situation that doesn’t allow her to use her sword. Though she understands the need for diplomacy, Chloe feels that it is a skill best left to others. Her strength is in battle, and that is never something she will regret. 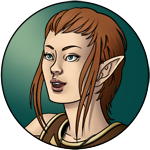 Nika – A smile on her face and a song on her lips, Nika is rarely ever one to show negativity. Life is full of adventure and story, and Nika is happy for both. Though she would rather talk her way out of a situation than fight, she is no coward. To Nika, her own happiness and positive view on life is not enough, and she does her best to keep others feeling the same. She knows well enough that confronting any danger is best done when one isn’t carrying the weight of the world on their shoulders.