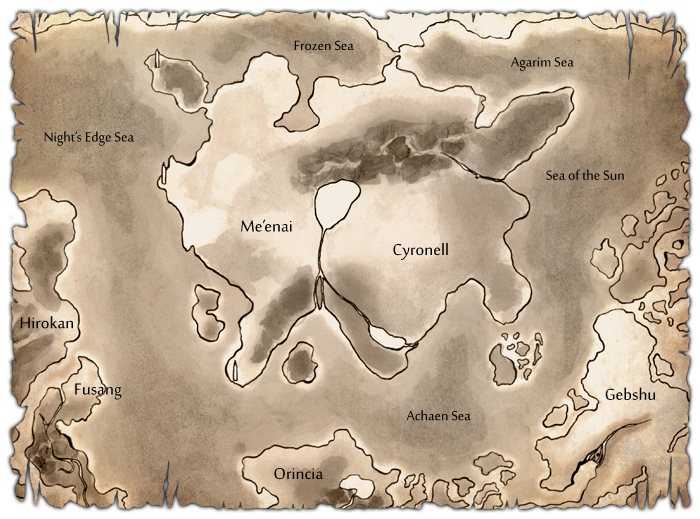 Distant Lands and Faraway Places, excerpts from the writings of Joro Kal

Cyronell
A land of rolling hills and farmland, I must admit that my opinions on my homeland are much dimished after years of traveling. Disparate, smaller Lords rule pieces of the land, fighting amongst themselves for more. Trade with the Elven Kingdom of Me’enai to the west and the Dwarves of the Aloraks to the north sustain the many peoples here. In all honesty, there is but one thing of note to my homeland. Amongst the grasslands are ancient ruins from times long past, a constant reminder that there are darker things waiting in the wilderness. Those with any intelligence stay far from these ruins, leaving a large tract of land completely uninhabited and dangerous to travel through. Of course, foolish adventurers and greedy nobles always wish to explore the wastes for riches, but they rarely return.
Hirokan
If it is possible to find a place any more different and strange from Cyronell than the island nations to the far west, I have not seen it. Hirokan, the more northern of the two, is a narrow island riddled with forests and mountain ranges. There is a single Lord that rules them all, but the people are divided amongst a strict clan structure that seems to be constantly vying for more power. Their warriors are fierce, and their gods strange. More spirits of the land themselves than powers above, but no less real. Though they trade with the rest of the world, they seem quite unfriendly towards outsiders. Thankfully, this general coldness towards travelers tends to fade with time and I can say I still have many friends in that land.

Orincia
The city-states of Orincia and the neighboring islands proved to be a land that I sometimes wish I had never left. The central island is covered in various cities that exist completely under their own authority, sometimes warring with one another but also banding together in times of need. The people are the most learned and wise I have ever encountered, and they are happy to share their knowledge with any that will listen. Oratory is seen as the greatest gift amongst the people there, and they truly use it well. Their Gods are powerful and dangerous, living high on a mountain above and watching over all. The stories I have heard make them seem more like angry, powerful men than wise deities. If there is one thing to learn in Orincia, it is that the Gods there do, indeed, hear all, and that it is best not to speak unkindly of them.

The Vast North
Ice. Ice and snow. Somehow, amongst all of the cold and frozen land that dominates the north of our world, there exists life. Some might even say civilization. In my short time exploring the north, though, I only saw monsters and beasts. Dangerous, deadly creatures that seemed to feed only on flesh. And cities? No. They were but small holds of cramped shacks behind small, wooden walls that did nothing to keep out the cold. It is no wonder those that live in this desolate place are as wild and vicious as the beasts that roam it.

Me’enai
Where Cyronell is divided, the Elven Kingdom that dominates the other half of the continent is strongly united. They claim their line of rulers is unbroken from their inception, and it is not something I would doubt. The Elves may rule, but they happily tolerate all within their lands. Like Cyronell, rolling hills dominate the landscape of much of Me’enai, though larger, more expansive forests dot the land. The Elves, themselves, have ports that dot their entire coast, with trading ships constantly roaming the seas. In many ways, though, Me’enai is not altogether different from my home in Cyronell. It is, however, interesting to see a land dominated by a single, powerful rulership rather than various lords that constantly wage small wars amongst themselves.
Fusang
The other of the nations to the west, Fusang is only similar to Hirokan at first glance. It is an island divided by a pair of rivers running from a central mountain range, yet with little actual land between for farming and what one would consider normal life. Yet people live here in tightly packed communities with massive numbers of people. It is an amazing sight, though the people are even more unkind towards outsiders than those of Hirokan. It is difficult to leave the ports without being under the escort of various well-armed guards that never leave one’s side. An Emperor rules them, but I know little more than he exists and is worshiped as a God. What little else I learned in my time in Fusang is that they are amazing inventors. Weapons that spit fire, flying machines, and ships that seem to not be powered by wind at all.

Gebshu
Ah, the deserts of Gebshu. While much of the continent is simply uninhabitable, the coast and river-valley are full of very interesting peoples. They are great minds and powerful in the ways of magic, their lives centered around yet another group of powerful gods that demand much of them. Ritual is everything, and their ruler is more a priest than a king. I sadly spent little time in this land, the heat being what it is, but of this I am sure: In no land have I seen such marvels as the massive pyramids they construct as burial sites for their dead rulers. Never have I seen a people so obsessed with the idea of death, treating their dead with great honor and respect.

The South
Beyond the southern coast of Orincia, a great red wall exists. The people all across the south say that this Great Wall has existed as long as the world itself. But some scholars in Orincia debate that idea, saying that it can be no more than a thousand years old. I did not understand their reasoning, but they are wise and I had learned to trust their reasoning. But what lies beyond this Great Red Wall? Our world is divided. Who would do such a thing? Why? What lies on the other side? Explorers have tried for countless years to cross, but none have found a way. Magic can take us to the heavens and far lands, but somehow, not beyond this magical structure to our south. If there is one kindness in my life, it is knowing that I travel north again soon, far away from that distant, uncomfortable red glow that never leaves the southern horizon.