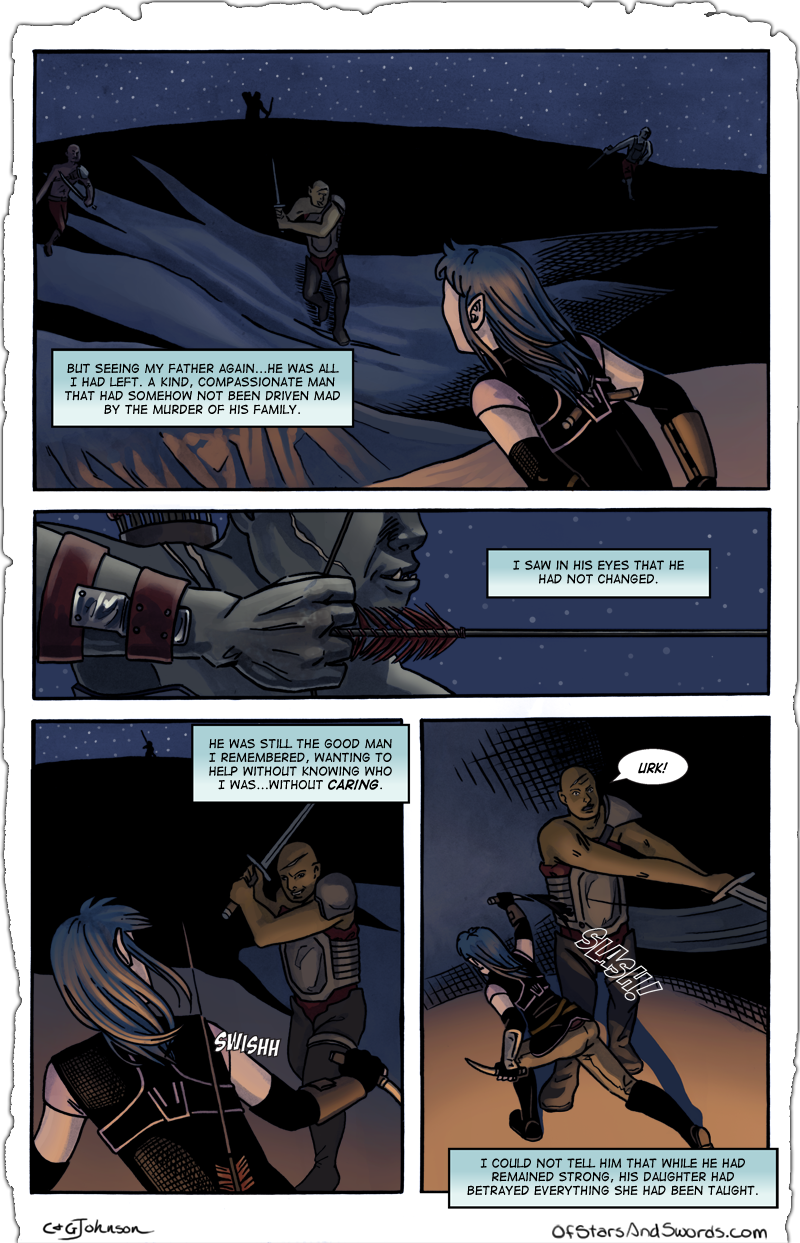 Within an Abandoned Building in Trien, u.1373

Seren looked over the man standing in front of her. He was older, but since joining with the Thieves’ Guild, he had taken her under his wing and been the most helpful of anyone. Almost a father figure.

His name was Kol. Or at least, that was what he went by. Many of the older members of the Guild had seemingly abanonded their given names years before Seren had even been born.

“I still do not understand the point of this,” Seren grumbled under her breath, taking in the room as she was taught to. It didn’t take long, there wasn’t much to take in beyond dust, a few crates, and boarded windows. Oh, and the candles that lit the room.

Kol shrugged as he retrieved a small dagger from the back of his belt, “This is important, kid.”

Typical of a girl her age, she rolled her eyes at the very notion that someone else could possibly know what was important for her. Her voice was at least slightly more polite, however, “I can already fight. The jobs you have me on are not even dangerous.”

“They will be,” he flipped the blade around and handed it to her hilt-first, “And fist-fightin’ ain’t at all the same as someone trying to kill you.”

Despite her defiance of the very idea, Seren took the dagger and eyed it suspiciously. Blades were a fact of life, and she’d been in more than one fight on the streets where one was pulled, but that didn’t mean she had to like them.

“See? You’re already doing it wrong,” Kol was clearly not in the mood to be encouraging. He reached over and adjusted her loose, bored grip on the weapon, “Drop it in a fight and you’re dead. Hold it firm. Got it?”

Seren sighed. It was her last act of outright teenage defiance, as it had become clear that Kol was determined to teach her whether she wanted to learn or not. Fine. At the very least, she’d show she didn’t need this kind of treatment. If there was one thing Seren knew she could do, it was take care of herself.

With a nod, Kol pulled out another small dagger, “I want you to come at me. Try to give me a good cut.”

One of Seren’s eyebrows went up. Her eyes went down to the blade she held. It was sharp. Real. A quick examination of Kol’s blade proved the same. Uncertainty washed over her face for a moment, “Kol…”

“It’s how you learn,” at least he understood her caution.

She knew that he was going to say that. Alright. Time to surprise him.

Quickly, Seren dropped down into a low stance. Her eyes hunted an opening and found several. Kol was just standing there, knife at his side and looking like he didn’t notice that she was ready. Just for that, she would cut him!

So Seren lunged. The moments that followed were a blur. She saw Kol move, faster than Seren had thought possible. There was a sudden grip on her wrist. It was tight. Then she was twisted away. The sudden pain took over her mind and only the sound of her dagger hitting the ground snapped her back into the moment.

What Seren found was that she now faced the other way, her right arm held firmly behind her, and Kol’s blade at her throat. How had that…?

“And now you’re dead,” the words were spoken in a very matter-of-fact way, and then Kol released her, “Do you know what you did wrong?”

That much was obvious to Seren.

“I picked a fight with someone far more skilled than myself.”

Kol laughed, but then shook his head, “A good lesson to learn but not the one I wanted to teach you. Fighting with a blade isn’t like fighting with your fists. You can’t throw a punch at me with a knife. Well, you can, but you need to learn how to slash. Cut the leg, they’ll drop. Cut the arm, they’ll lose their weapon. You don’t have to kill. In fact, you shouldn’t. That’s not we do.”

Seren’s eyes narrowed. It was like he was still toying with her, “I still do not understand the point of this. I do my job without being caught. No weapon is necessary.”

“That won’t last forever,” Kol motioned to her dagger, still on the floor, “So are you going to keep being childish or do you want to trust me?”

For a moment, Seren just held her glare. He was trying to bait her. Her eyes went to the dagger again. Far enough away that she couldn’t just pick it up, and he was standing differently now. No casual boredom, Kol looked ready to spring.

He wasn’t going to let her get the dagger without work.

So her eyes then went to his blade. At his side, but slightly forward. He was ready. Ready, but all of his weight was on his left leg. Ready to dive in front of her going for the dagger. Inwardly, Seren smiled.

And then, again, Seren lunged.

But she didn’t go for the dagger on the ground. She planted a foot that direction and then pushed off the other way. Kol was a half-second late to react, which was more than enough time for her. Seren ducked low, under his arm that held the dagger, and then swept his feet out from under him.

Kol went down face first. But as he hit, Seren grabbed his arm and used the surprise of his fall to wrench his own dagger free. Before he could get up, she dug a knee into his spine and flipped the blade around, gently placing it again the back of his neck.

“I believe you are dead.”