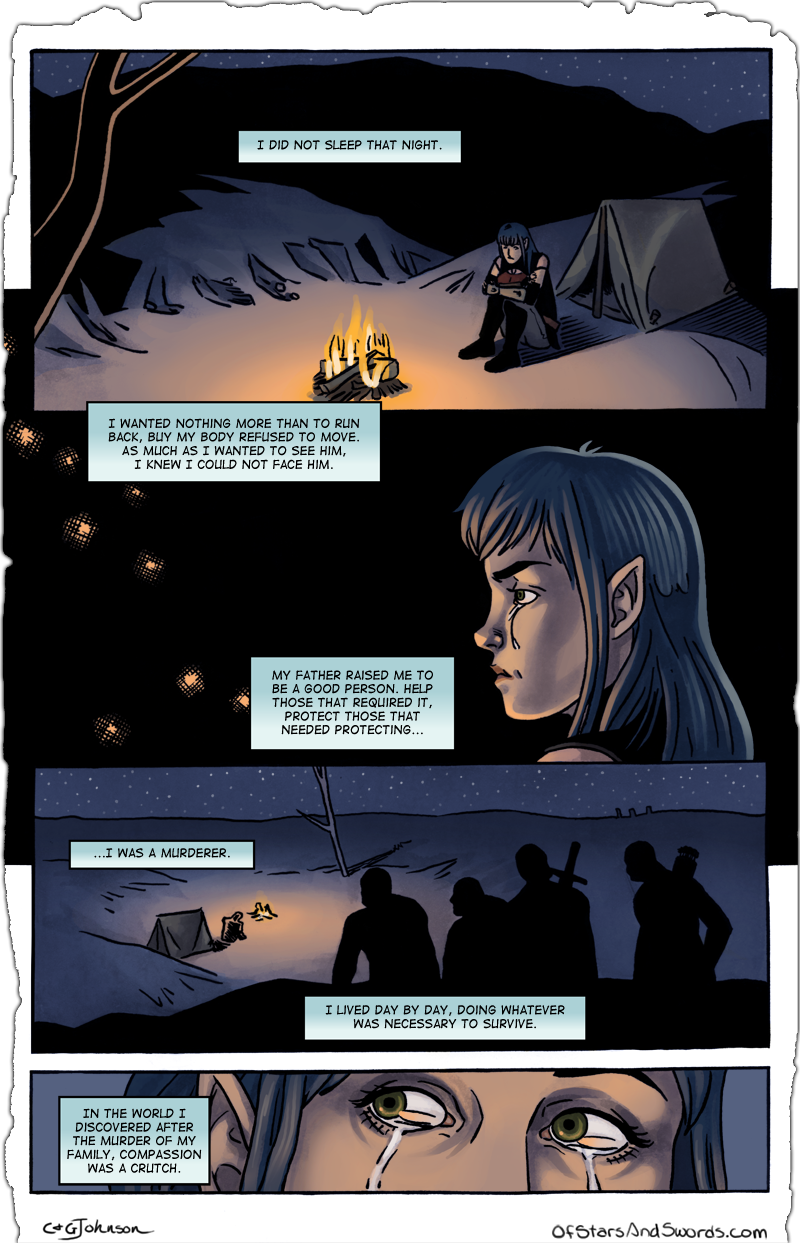 A quick note before the meat of today’s blog post. Just a simple little thing that I felt was necessary. Hope you all are enjoying the comic so far! We’re now halfway through the Prologue, or Issue 0 as it is in my head. Things only get better and better!

And, of course, have a Happy Christmas and/or any holiday you celebrate or don’t this time of year!

The creatures known as Orcs are a very difficult beast to classify in the traditional sense. Their origins are clouded in various creation myths across varying cultures, their tribes scattered and seemingly independent, and even their species is shockingly diverse, perhaps moreso than any other that walks our world.

The word Orc tends to refer, generally, to one particular type of creature. They are humanoid shaped and generally larger than most Humans. Skin colors range from pinks to greys to greens, and hair color tends to simply be black. Ear shape hints at some connection to Elves, but then again, some of the smaller races have similar ears and are wholly different beings. A heavy brow and sloped forehead are common, but not universal.

These creatures tend to collect themselves in various tribes. It is hard to tell what connections they have to one another, if any. Sometimes they work together, other times not. They seem to have as many political infights as any other species.

It is widely assumed that Orcs are brutish, stupid creatures that want only for blood and death. While parts of this may be true, it would be dangerous to assume stupidity. Many Orc tribes have waged long wars against supposedly stronger, smarter kingdoms with great success. Military tactics are not unknown to the Orcs, and though they seem to prefer simply overwhelming numbers, time and again smaller groups of these creatures have overwhelmed entire towns guarded by heavily armed soldiers.

Unlike many of the other larger collections of species that walk the world, Orcs do not occupy one land more than another. They seem to be everywhere in varying numbers. Still, even spread across the world, some things can be said confidently about them. On the whole, Orcs stay away from the cities and towns. While raiding parties are common in some lands, the actual settlements are kept well hidden in places that others would rarely look. Underground, deep in swamps, buried in ancient ruins, and other environments considered unsuitable for settlement are common places to find an Orc encampment.

Little can be said about their culture, but clearly one exists. Orcs have their own language, guttural and vile to the ear. They also have their own Gods, dark beings that call for blood and sacrifice. Why so many Orcs commonly raid towns and villages is hard to say. It is rare that they speak to those on the receiving end of their assaults, and even rarer that they leave survivors. But clearly they do, for half-bloods are not uncommon. They are products of Orcs and Humans, usually the result of said raids. Even if the children live they will likely have a very hard life among their Orc or Human parents.

Still, that so many Half-Orcs live happily amongst more civilized peoples says something about the nature of the Orcs themselves. If they were truly evil beings, would not it be in their blood? Even half-bloods would, thus, be dangerous and evil beings…yet they are not. No more so than any other person. It is an interesting fact that so many attempt to ignore.

Now. To move onwards, a look at the various similar species to the Orcs that may, in fact, be part of the same family of creatures: Goblins, Hobgoblins, and Bugbears…