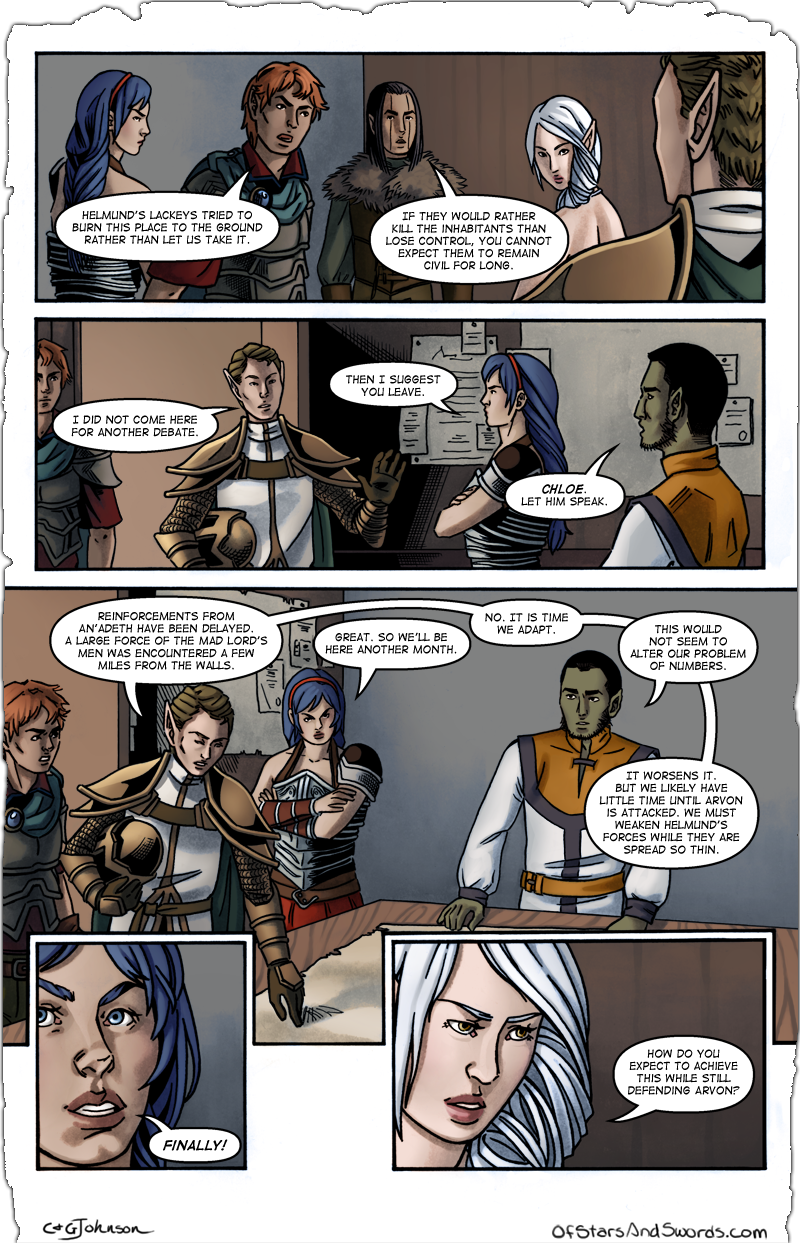 If there was one thing to be thankful for in the current situation that Cato found himself in, it was that nearly all of the structures in Oriona were made of marble. The stone was solid enough to, say, support the weight of a full grown man running on top of a narrow strip of it. Not that running along a railing well above the ground level of Oriona was a particularly great idea, but so far, it was working out well enough.

One foot after another. Fast, quick, but eyes watching the railing so that he knew exactly where to drop his next foot so as not to slip off the side, either into the crowd of shocked people on his left or the crowd of shocked people down on the ground below. Admittedly, falling on one side would likely mean he broke his neck, at best, where the other meant he was trapped in a crowd of people while an angry mob, along with a few guards, caught up to him. Neither were the best choices. Hence the running.

Every so often, the railing disappeared to leave an opening for one of the wooden bridges that crossed above the street below to the buildings on the other side. So far, Cato had managed to make the jump and stay on his feet three times. He couldn’t help but wonder if watching him manage to not kill himself was the reason most of the people around were just standing idly instead of helping to stop him. They were yelling like they wanted his head, but they looked entertained, at least.

Cato leapt across another gap in the railing, momentarily closing his eyes and then realizing how stupid a thing that was to do. His eyes were opened again just as his foot came down on the railing on the opposite end of the bridge, and he was running again. Running and absolutely not looking down to his right. Not at all. Not even out of the corner of his eye. Not even a little.

Forcing his head up, Cato realized he was reaching another difficult decision. Ahead, not far at all due to the speed he was managing to run, was the great blue building and the mass of steps leading up to it. He could even see his brother Kyros there, midway up the steps, those three priests standing and watching, and the crowd that had not given chase clearly trying to decide if they should cheer or call for Cato’s head. None of those were the actual problem in front of him, however, though they were going to be something he needed to deal with almost immediately after.

First was the difficult nature of being up on the second level of the city, which stopped completely before the large, open forum in front of the steps. The temple seemed to be its own massive complex, separated from the rest of Oriona by the steps leading up to it.

Cato’s eyes darted around as he sprinted closer to the gap. He could turn left and run off to the east of the city, but that would, once again, take him away from Kyros. Having actually put a great deal of distance between himself and the mob after him, Cato wasn’t about to run further from his brother. Doubling back on the second level had been a smart move, now he just needed to figure out exactly what kind of stupid move he was going to have to make to get back down without landing in the middle of the crowd that had called for his head but not actively run to retrieve it.

Cut the ropes holding up a nearby bridge and swing down? No. No, that would drop him behind the crowd. He needed to get past them somehow and—

About sixty feet ahead of him, still a good ways before the end of the second level, Cato watched a rope drop down from the third level of the city above him.

The rational part of Cato’s mind told him that this was such a coincidence that it was clearly a trap of some kind. He had caught sight of people above watching just as much as those below. But the rational part of Cato’s mind was not winning any battles today. Instead of listening to the warnings, Cato drew his short sword and shifted it immediately to his left hand. He looked up for a moment, but couldn’t see what the rope was attached to thanks to the marble directly above.

That meant, of course, that it was time to do something so incredibly stupid that, if he survived, Cato would make sure to change this part of the story when he told it. Say that someone above called his name and he recognized a face so that he knew it was safe. Or he’d planned this all along. That one. Definitely that one. Always make them think you plan ahead.

The story was set in his mind just as Cato got to the rope, which was idly swinging his direction. It was long enough. It would work. If it held…

There was no time for any test to be done. Cato wrapped the rope around his right arm as quickly as he could and, still running forward, pushed off the railing and out over the gap above the street.

For a short, terrifyingly exhilarating moment, Cato felt like he was floating. And then he realized he wasn’t dropping. The rope was holding. He managed a glance up and caught sight of two young men holding the other end of it. Who…?

No time to think, and he couldn’t make out their faces. He swung in a long, low arc over the crowd and let go right as he got close enough to the steps on the other side. Cato hit the ground hard, barely managing to stay on his feet as he landed on the marble steps. No time, still. He’d heard an actual cheer from the crowd, but also more sounds that were likely swears, at best.

Say something witty. He had to. But Cato was still catching his breath and trying to make sure no guards were near to ruin the daring rescue. So he just did the best he could, half smiled at the priests, and said simply, “Ha.”