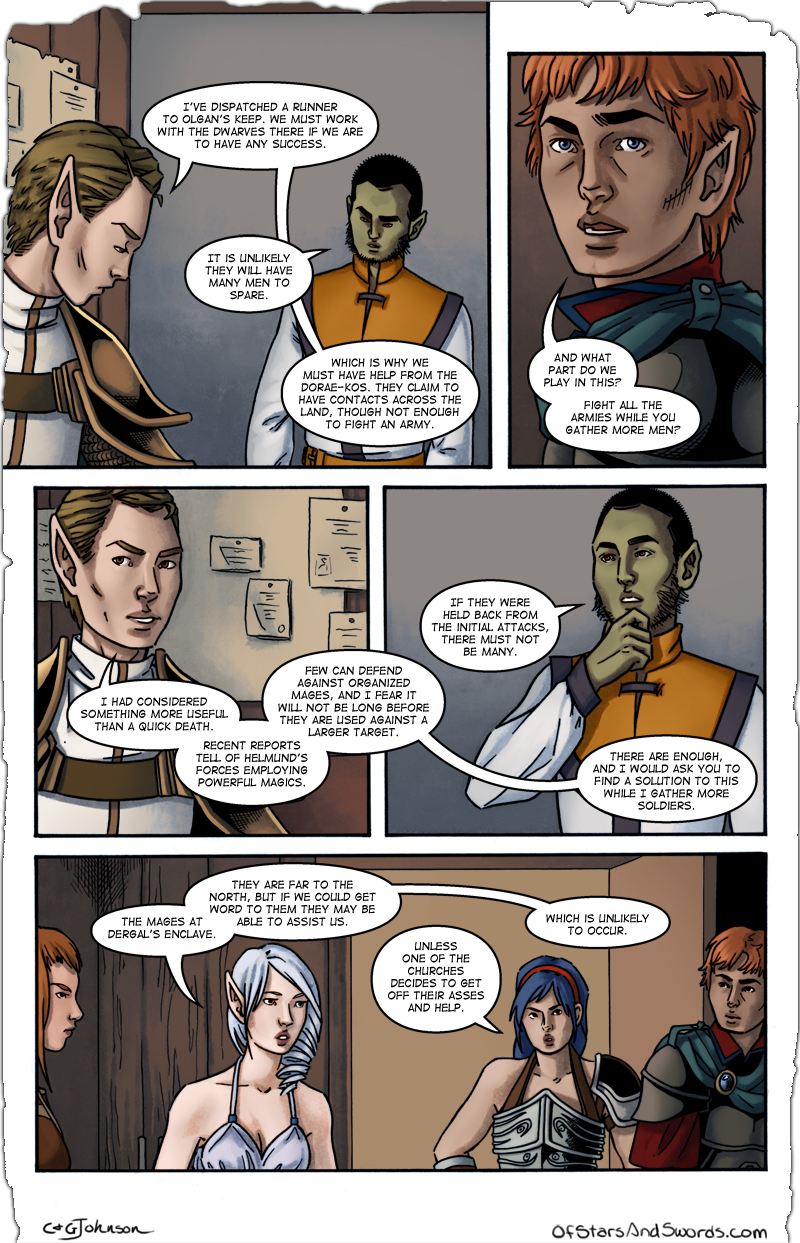 If there was one way to silence a crowd and get everyone’s attention, it was to put a sword to the group’s leader. Technically, the three priests before Cato weren’t the leaders of the crowd, but the one with a sword at his throat had called for Cato’s head and caused the literally circular chase. So this was close enough, in his mind.
Some of the lightly armed Oriona city guards were nearby, but they were keeping their distance. The crowd below, in the open square before the massive steps leading up to the temple above, was frozen as well. Cato’s eyes took a quick moment to look around and he noted that the only movement he could see was on the other upper levels of the city. People were crowding against the marble railings, looking down and trying to figure out what could happen next.

Interestingly, the rope that had been lowered for Cato to make his dramatic landing was no longer visible. It was an important detail that did not escape Cato’s view, but he knew it was something he would have to worry about later. Since at the moment…

“If you are going to kill me, then get it over with,” the priest in the center, his eyes looking down at the blade pointed at his throat, spoke in a surprisingly calm voice.

Cato shook his head, but did not move his sword at all, “I don’t want to kill anyone.”

The priest, a middle aged man with a bald head and sharp features, raised a thin eyebrow, “Then it is further thievery and defilement of our treasures that you would prefer?”

If that what Kyros had been up to? Typical.

“Neither,” Cato made sure to answer quickly and loudly enough that at least the people closer to the steps would hear the denial, “I just don’t want to see my brother lose his head for…whatever it is he’s done.”

“You deny that you have assisted this man, then?” it was another of the three priests that spoke that question. He was shorter, rounder, and all-together angrier looking than the man currently at sword-point.

“Why are you interrogating me?!” Cato gestured with his sword hand at the priest in front of him, causing the point to push uncomfortably against the priest’s crimson robes, “I’m the one with the sword and that usually means I do the demanding!”

The third priest, a hawk-like woman, motioned to the crowd beyond, “You hold one sword to only one of us.”

“Well…” Cato shrugged and trailed off. She had a point. Still, “Okay, listen, how about this? Let my brother go. I’ll pay you whatever I have to and neither of us will ever, ever come back here again.”

The central priest actually leaned forward at that, pushing the sword even more against his robes, “No gold can pay for what he has done.”

Cato’s head spun around to glare at his brother, who was now up on his feet and failing to fight back a grin, “Kyros, what did you do?!”

But Kyros didn’t have a chance to answer. It was the shorter of the priests that growled a typically angry response, “The Blood of Torlos has been defiled and he will die for it!”

Cato shook his head and sighed. This was too damned complicated. He didn’t know what they were talking about, but considering it was sounding like a religious matter, they clearly weren’t going to back down. This was why Cato hated the devout. It was hard to be reasonable when a deity demanded vengeance and would strike one down for not following orders. Though Cato had always wondered why deities only ever struck down followers and not their enemies…probably better not to think on that.

To the hells with all of this anyway!

Cato’s free hand shot out and he grabbed Kyros, dragged his younger brother closer to look at the bindings on his hands. Just leather. Probably only bound him so he wouldn’t squirm so much when they were getting ready to lop his head off. At least that was something he could deal with.

Then, as quickly as he could manage, Cato acted.

He pulled his sword back and delivered a strong kick to the head priest’s stomach, sending the man stumbling back into the other two. The guards started moving right at that moment, and the crowd even began to move a few steps closer then, too. Cato brought the sword around and swiftly cut his brother’s bindings and then looked the younger man straight in the eyes.

“I am going to kill you later when you have properly explained to me exactly why I’m killing you.”

Kyros nodded, grinned, and motioned with his head to the various problems that were moving up the stairs to them, “Shall we run away first?”

Cato nodded, “Only one direction to go, at least.”

The brothers then turned, as one, and ran up the steps to the massive complex beyond. The stairs were the only way he could see in or out. Cato hoped that there were tunnels or something to escape from, but at the moment, if they had to circle around for hours, that would be enough.

Once again, Cato found himself running from a group of guards and an angry mob. And once again, Cato wondered why he put up with all of this from his brother so much.