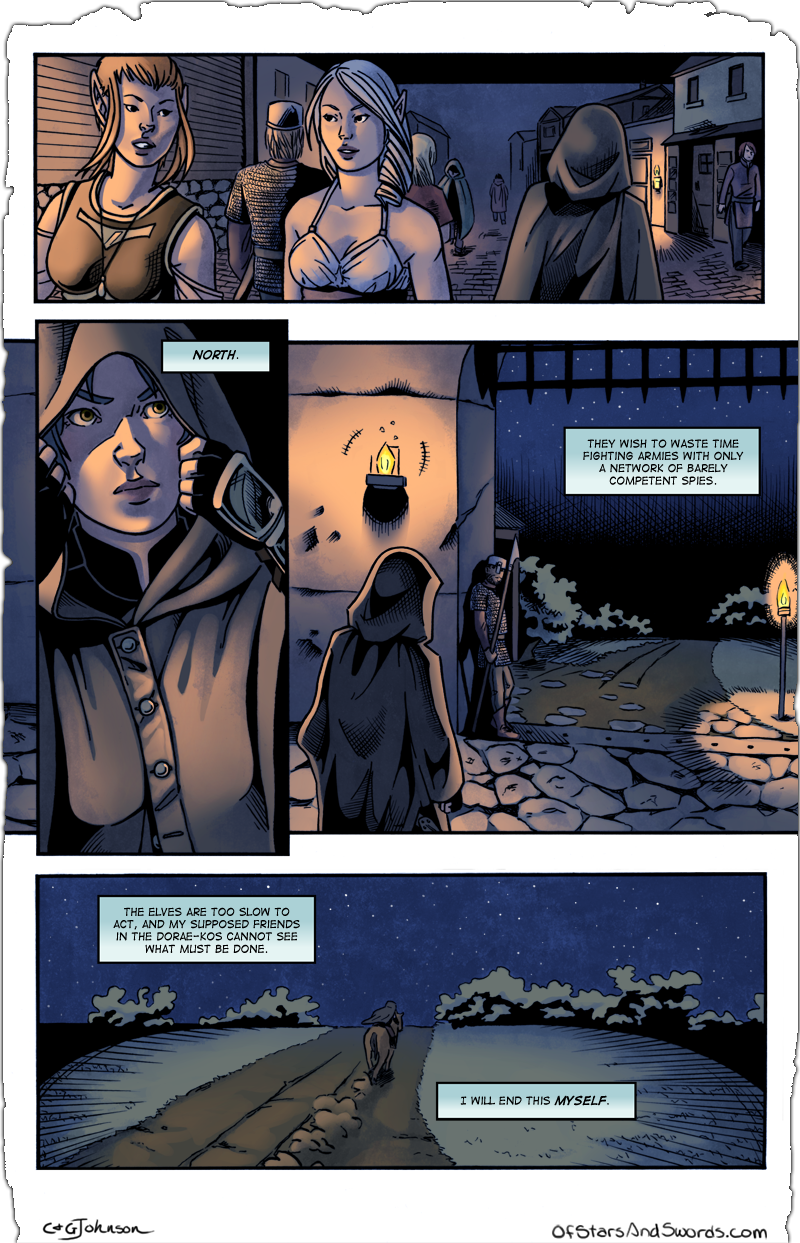 Cato was learning a great deal about the city of Oriona in his short time there. The marble city was a sight to be seen, indeed, rising five levels up as well as being spread across a large portion of the southern coast. Apparently, there was far more to the city than even that, as he and his brother were now being led underneath the city by this strange young woman.

“Sewers usually smell worse than this,” Kyros observed. He was right. There was also a distinct lack of any water flowing, which was odd being on the coast and underground. It was all making Cato uneasy.

The woman turned and glanced over her shoulder to the two of them, her face only visible due to the torch she now held in front of her, “Not sewers. Entire city down here. Few know.”

Cato shook his head, but she had already turned around and wouldn’t have seen. This was still all far too convenient for his taste. They’d retreated into a massive complex at one end of the city, trapping themselves while an angry mob came for their heads for reasons he still didn’t completely understand. This girl had shown up and led them down into the lower levels of the temple complex and through a not-terribly-secret-looking door that led to tight, winding steps which eventually brought them down into the tunnels.

“Those priests have to know,” he said quietly, not liking how the stone walls caused their voices to echo.

“Oh, they do,” her answer was a statement of fact, with no real emotion in her voice at all. But she added a shrug a moment later, “Take time to realize you are here, though. Time to get away. Would not expect you to find tunnels.”

Kyros, never one to question anything, glanced behind them and just smiled, “Works for me. Nice to walk somewhere, honestly. All the running and dragging and kneeling makes a man tired.”

Cato glared at his brother, but decided not to start another argument. Yes, it had to be so tiring watching Cato run for his life around the city and then swing in and save Kyros before they both ran for their lives. Of course poor Kyros would be exhausted after all of that. Mentally, Cato made yet another note to hit his brother when they were safely away from people wanting to do far worse to the both of them.

Instead, he simply sighed and followed the young woman as she led the way. He couldn’t tell how she knew where to go, but there was clearly a direction in mind. The tunnel was dark, but there were notches in the wall for torches to sit, so the level of light was clearly not by design. The stone was different than the marble above. It was carved, yes, but Cato had a feeling it was the actual foundation beneath the city rather than the ground itself. It was too clean, and the width of the tunnels were all even, about what one would expect in most hallways in a normal building.

In fact, if not for the darkness and the lack of windows, it would be hard to tell that one wasn’t in a normal structure above ground. They’d passed through various intersections of other tunnels, turning at some and going straight through others. There were even doors in some places, some made of wood and others that looked like iron. The lack of people was unsettling, considering that it seemed to be designed for a great deal of people initially. What were these tunnels and rooms used for now? Who used them? It couldn’t just be for convenient escapes.

After a long silence, simply following, Cato’s mind had run itself into so many circles that he was going to go crazy if it continued. Finally, he attempted to get answers again, “Are you going to tell us where we’re going or are we just supposed to keeping trusting you?”

The woman glanced over her shoulder for a brief moment, but then shrugged again, “You are welcome to find your own way. City is dangerous, though. Especially for the two of you.”

“That is uncomfortably close to a threat,” Cato glared at the back of her head, hoping it would do some good somehow.

Ah, yes. That. Cato’s glare shifted to his brother, “I’m still not sure what you did, Kyros.”

“I really didn’t do much,” Kyros actually looked apologetic for once in his life. That was worrying, “When I got here I heard about some people going missing. Guards weren’t looking into it. Figured there was money in helping the families and sent you that message. Next day, followed a trail to a smaller temple on the east end of the city and after that I’m not really sure what happened. Then you showed up.”

Cato sighed, “I like how you always manage to forget the parts of stories that incriminate you.”

“I’m serious!” his brother shook his head and waved a hand in front of him vaguely, “It looked like a normal temple doing those weird rituals they all do. I asked one question and they all freaked out and then I was running and…well, then I got caught.”

And then their guide stopped.

She turned around and directed a very piercing gaze in Kyros’s direction, “It is not what you said, but what your eyes saw. Is also why I am helping you. We have been looking for what you found for many months.”

“I don’t even know what I found!” Kyros put up his hands in defense and shook his head.

But that wasn’t what had Cato’s attention now. His eyes narrowed, “Who is ‘we’?”

“Ah…” she trailed off, clearly thinking. That worried Cato enough that his hand was now near his sword. But her eyes followed his motion, “As I said, I am a friend. Was following your brother. Helped you save him. Helping you now.”

“You are very bad at dodging questions,” Cato took a step back and moved his hand away from his sword. She didn’t seem to be a threat, but there was something odd about her that he didn’t particularly like.

She smiled slightly at him, though, “Common is not my first language. Difficult to be subtle when struggling for right words. I work with small group. Rumors of something found here in Oriona months ago. Think your brother found what we have looked for. Hint of what is happening. Not good if they want you dead for only seeing.”

Kyros nodded to that, “That’s one way to put it.”

“And that’s still not answering my question,” Cato was not about to let her deflect his questions by acting like she didn’t know what she was saying. She was clearly smarter than that, even if she was trying to hide it, too.

There was a short silence as she met his gaze. She was thinking again. Her eyes gave away the intelligence and planning that her words attempted to hide. There was work going on behind it all. Hopefully she would actually be able to see that he wasn’t as easily fooled as his brother. A pretty face wasn’t going to distract Cato. Not usually.

“My name is Anica,” she relented, and for a moment, Cato could see the defenses on her face fade slightly, “I take you to other friends, then explain more. You will be safe.”

Another silence followed. Cato was looking for something, anything that would hint at her hiding something or lying or…anything, really. But there was nothing. Either she was very good at lying or she was telling the truth…or Cato wasn’t as good at reading people as he liked to believe.

Anica smiled before turning and leading the way again, “I apologize for secrecy. Difficult habit to break. City is dangerous today. We will be to safety soon, then can explain more.”

It wasn’t the best, and Cato was still uncomfortable with the entire situation, but he figured this was the best he was going to get for the moment. So rather than tempt fate, he fell into step behind Anica and his brother yet again. The day really refused to end, it seemed.