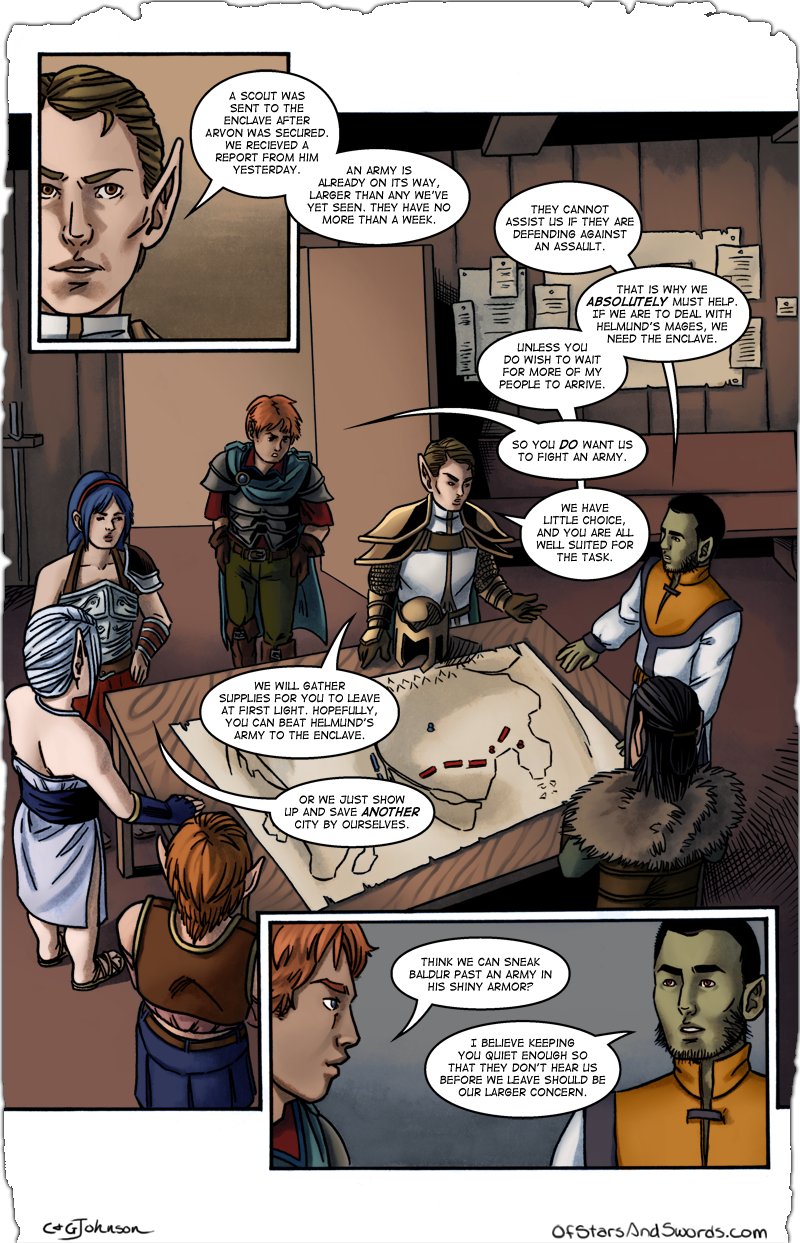 The massive complex at the southern tip of Oriona was, Cato quickly realized, practically a separate city all to itself. It had been obvious from the moment he’d entered the city and saw the stairs leading up from the city gates that this was a temple, but there was clearly much more to it.

When he and his brother had reached the top of the steps, they were confronted with a large, open courtyard filled with exotic plants surrounded by four long, rectangular-shaped marble buildings. Columns lined pathways across the entire area, and at the very most southern point was a final, three story high octagonal tower. Beyond that was the distant, red glow of the magical Wall out in the ocean.

That sight was what tied it all together for Cato. This was a temple, yes, but here is where the mages and priests and other learned people studied the distant Wall. Which meant that there would be such people all throughout the complex, though Cato had only seen a few attendants dealing with the plants or going about their business as he and Kyros bolted past, trying to figure out exactly why they’d run to a section of the city with no escape rather than back into the mob that wanted them dead.

The good thing was said mob was a good distance behind them. They’d managed to get up the steps before many of the people had even decided to give chase. Thanks to that, Cato and Kyros had found a nearby building off to the west side of the complex to duck into without being seen. There wasn’t much time to inspect the building as they ran as quietly as they could through the stone hallways, but Cato couldn’t help but notice the lack of doors on the various rooms they passed by. That would make things diffcult.

But after a few minutes of winding through painted marble hallways, lined with odd looking artifacts and items, the two brothers found a small room that was mostly out of sight to finally stop and catch their breath in. It was dark, too, thanks to a lack of windows, and that was definitely a plus. There were a few barrels around, and it smelled of something that Cato couldn’t identify but felt it was better not to think about; mages did strange things with stranger ingredients.

“That was fun,” Kyros grinned through his heavy breathing as he slumped down against one wall to have a seat for a moment.

Cato glared in the direction of his brother, “I’m glad you’re still entertained by your imminent death.”

“Really?” Cato glanced outside the opening of the room, cautious but still glad he could neither hear nor see anyone nearby so far, “We’re slightly cornered. And tired. And have no idea where we are. Or where we’re going. I also really don’t want to kill people to get out of this mess when I’m fairly sure you deserve what they want to do to you.”

“To us!” Kyros corrected him a little too happily.

Cato let out a sigh and stared up at the dark ceiling. There was no point arguing, even if his natural inclination was to argue for years on end with his brother. They were going to be found eventually. There was no way out of the temple complex that he knew save for the stairs they’d come up, which were likely still being watched. Yet, they were alive and resting for the moment so it was best not to focus on the overall problems and solve the simple ones instead.

Before he could speak any of this and get to some kind of planning of their next steps, Cato heard footsteps.

His eyes immediately went to his brother, and Kyros nodded silently. The two brothers very quickly got to their feet and pressed against the walls in the dark room, listening.

The footsteps were growing closer. But they were soft, almost hard to hear. And they were coming from the direction that the two of them had been heading towards, not where they’d come from. Someone alone? Only one set that he could hear.

One person that walked very deliberately and quietly coming from the wrong way.

Just a random priest, maybe? Or a mage? Or someone that didn’t know that he and his brother were wanted dead as soon as possible? All were better than the alternatives and—

The end of a rope suddenly plopped down onto the marble just outside the door. It sat there curiously for a moment before it shook slightly. When Cato and Kyros looked at each other in confusion, but did nothing, it shook again.

“I’m not sure I can make this any clearer,” a quiet voice echoed down the hallway towards them just as the rope shook again.

Against his better judgment, Cato stuck his head out the door. A few meters away, where the hall turned left, was a young woman in a short, green robe. She looked like a completely normal girl until his eyes took in the fact that she was holding the other end of the rope and shaking it to get his attention.

Seeing his face, she grinned and nodded, “It helped earlier, yes?”

Cato started to put things together. He had already stopped wondering who had dropped the rope for him to make the dramatic landing on the steps between his brother and the priests. But this girl? She had strong arms, yes, but there was no way she could have held it by herself. Besides, how had she even gotten in here with that rope before the mob?

“I can help,” she began to retrieve the rope and wrap it up quickly, motioning wit her head back down the hall the direction she’d come from, “Other ways out than into the arms of an angry mob.”

Cato and Kyros exchanged a look again. They said nothing, as there was really nothing to be said. They had no idea who this girl was, why she was helping, or why she hadn’t just mentioned the rope from earlier rather than carrying some to throw at them awkwardly. She was clearly a strange one, but considering their situation, what choice did they have?

Shaking his head, Cato stepped out of the room, his brother behind him just a few steps. Before either of them could ask anything else, she finished coiling the rope back up, tucked it under one arm, and smiled proudly, “Follow. I will explain more to you once we are in a safer location. Best to escape first, yes?”

It would really have been better to press her for at least some information right then and there, if only to confirm that she wasn’t going to lead them straight into the mob. But Cato seemed to be consciously making decisions that seemed foolish and yet still worked out since walking into Oriona, so he decided to just continue the trend and deal with any problems as they presented themselves.

He motioned towards her and simply said, “Lead on.”