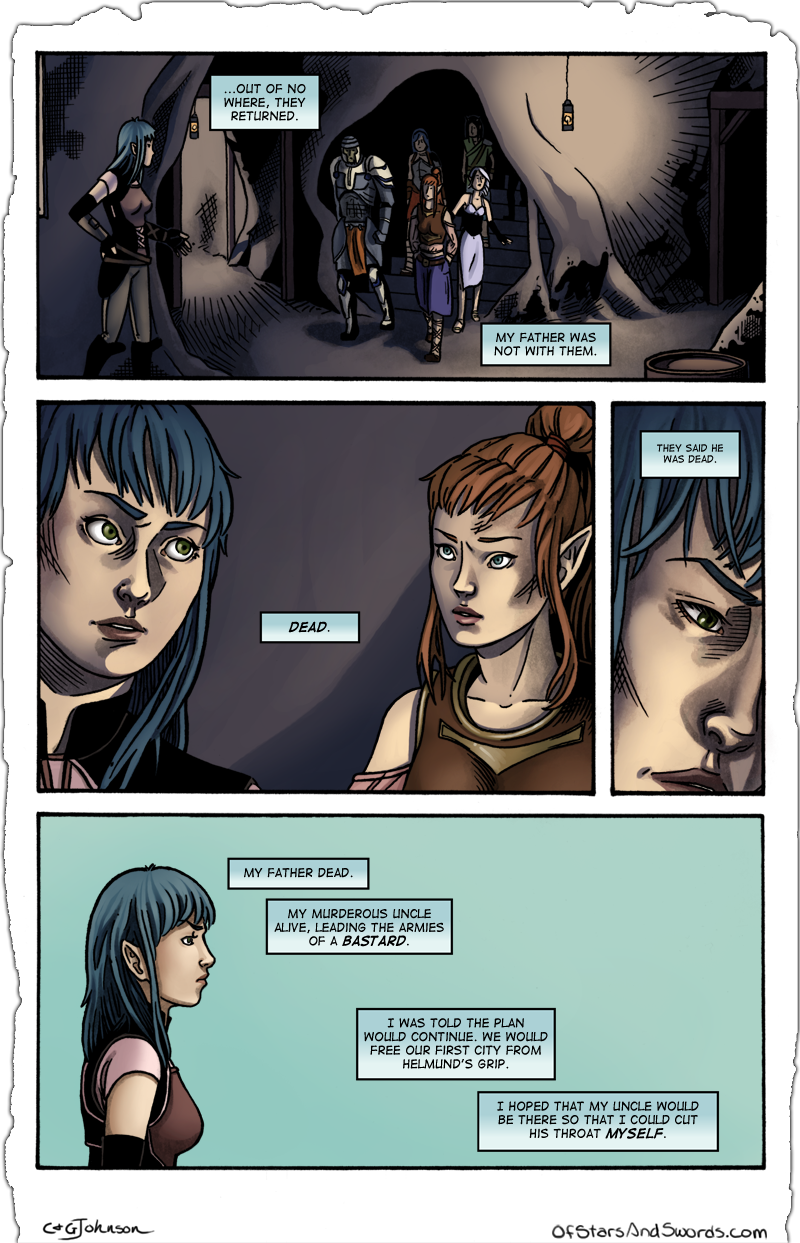 Meeting of the Dorae-Kos Leaders, recorded by a scrying device to spread the information with other cells, u.1375

The small, candle-lit room within the cave hideout of the Dorae-Kos is occupied by only five individuals. The room is small, with a pair of rickety tables pushed together in the center and an old map barely flattened out on top.

Though there are enough chairs, no one sits. There is an air of uncomfortable silence hanging in the room, only broken by the sounds of breathing and slight movements.

Eventually, the Dwarf steps up to the table and glares down at the map. His voice is gruff and he speaks quietly, an odd combination for a small creature that looks to be built only of muscle, “We have failed.”

The Elf woman, towards the back of the room shakes her head and speaks towards the rock ceiling, “Do you have any other insights into the obvious, Jor?”

“This is not the time for an argument,” the Halfling near the door interjects before Jor, the Dwarf, can spit an explicative back at the Elf. The Halfling then steps forward to the table in the center of the room and speaks to the rest of them in a calm, collected tone, “It is not a bad thing to acknowledge failure. If we cannot do that, we have no reason to be here.”

“I agree,” the Elven man comments quietly but surely enough. He stands behind Jor, casually looking over the shorter Dwarf to look over the map, “Dien, you must move beyond the past and look to our new goal.”

The Elf woman does not seem placated by his words. Instead, Dien directs a sharp glare in his direction, “New goal? Are you delusional? In barely a week and a half we have watched Helmund’s armies destroy every single undead on the continent and simultaneously conquer half of Cyronell! What is there for us to do when we have already so horribly underestimated his plans and his resources?! We did not even know the Mad Lord had an army until they began to march!”

“Yelling will do us no good,” the Halfling once again attempts to play the mediator, but it is clear that Dien has no intention of listening to him.

She steps forward and puts a single finger down in the center of the map, eyes narrowed as she glares straight at the Halfling, “Neither will meeting in this hole in the ground and not telling our agents to simply go home and try to protect their families. We cannot keep them here when there is nothing we can do against this Mad Lord.”

“We can fight,” the last individual in the room spoke up, finally. The young, Half-Elf girl stands near the door, eyes forward but seemingly staring into nothing at all; an unnerving gaze for someone so young.

“Fight?!” Dien, finally consumed by her anger, grabs up the map and throws it at the girl, “Fight with what? We could not hold back the undead and they were swiftly defeated by Helmund’s armies!”

The girl takes a step forward, her eyes shifting to Dien and presenting the older Elf woman with an unreadable expression, “Then we fight intelligently.”

Dien rolls her eyes upon hearing the girl’s words, her response immediately moving from anger to sarcasm, “Yes, of course! How could I forget that you, Seren, are our greatest mind! What, exactly, would our child prodigy like for us to do?!”

Seren takes another step forward. At the same time, all of the others take an unconscious step back. The air of tension has grown into one of near-violence in between Dien and the girl.

Yet Seren’s voice remains steady and calm, “I would like you to leave, Dien. This is neither the time nor the place for your hysterics. We will continue to fail so long as you are here to distract us from our goal.”

“Really? So will you at least inform me of this mysterious goal I have heard twice mentioned now? I’d like to know what foolishness I shall be forcibly removed from,” Dien steps around the table, now barely a meter from Seren. The others in the room are looking over the two women now, quickly trying to identify if either or both of them are armed.

Seren meets Dien’s eyes with no difficulty at all, “We have contacts and agents across all of Cyronell. We will use them as we always have. This misguided attempt to create an idealistic group of fighters against a single insane man will become a well organized, structured, and actually competent resistance movement.”

As she speaks, Seren takes a step forward to close the gap between her and Dien. This time, however, Dien takes a step back, nearly tripping over the table in the process. Seren does not give her the chance to respond, and instead continues, her voice growing more dangerous with every word, “We will stop these childish idealistic dreams of what war is. We will strike at every single weakness we can find. If we must kill each and every individual that makes up Helmund’s forces, then we shall. And we will continue this until Helmund and his supporters are all dead, or until we are.”

It is Jor who, once again, ends the silence, “I agree with Seren. The reports of slave camps that the Mad Lord has created are enough to tell me that our failure is because we were afraid. We can’t afford to let fear paralyze us any longer.”

The Halfling nods, “I do not enjoy the idea of where this will take us morally, but you are both correct. Action is required now. True action.”

“Indeed,” the Elven man also nods, his eyes looking to all of the others and ending on Dien, “We have the resources to be an effective rebellion. Our inaction has allowed this to happen and we can no longer fail so monumentally again. We must right this, and it will take drastic steps.”

All eyes in the room turn to Dien. There is silence again. Jor does not break it. Instead, Dien steps past them, wordlessly opens the door to the room, and closes it violently behind her.

The four that remain do not hear her footsteps as she leaves. Instead, they immediately begin to plan a resistance against the Mad Lord.