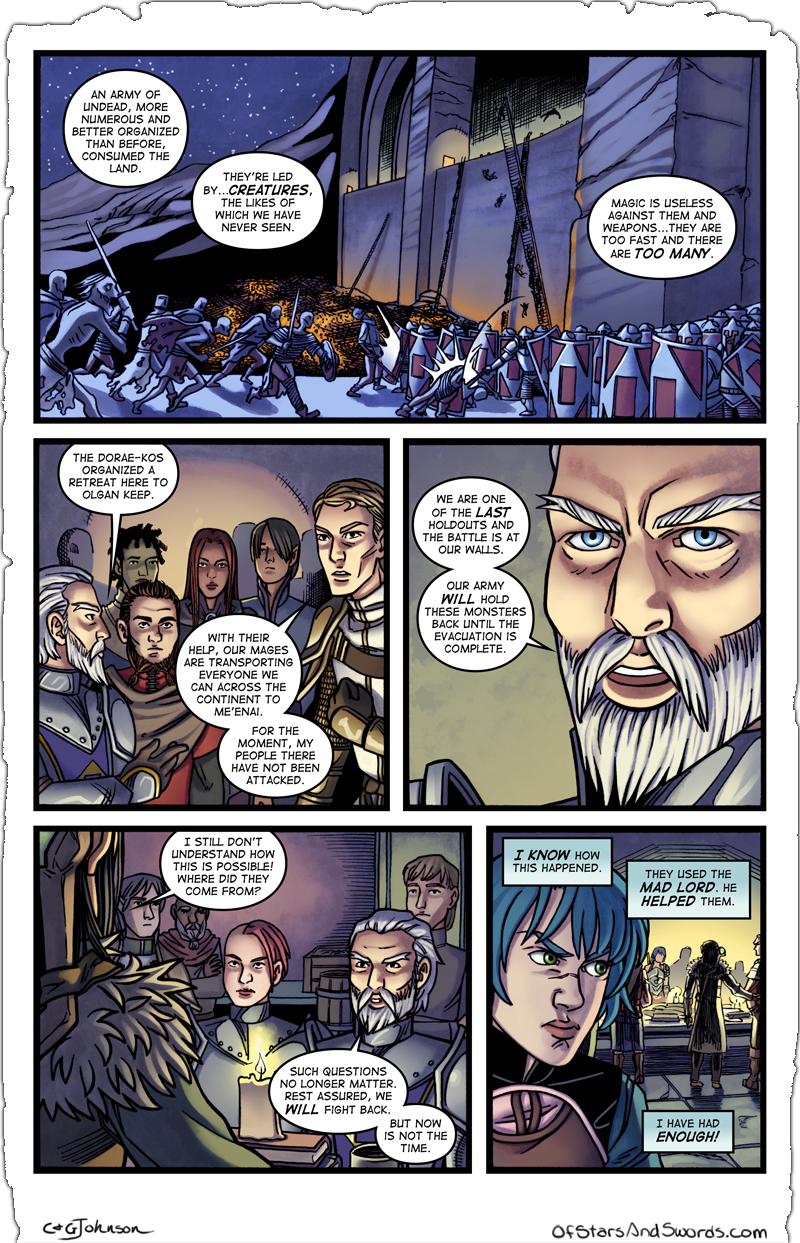 As this page suggest, everything has basically gone completely bad for the world while our heroes have been off in other places. On the positive end, at least there’s a plan! And the Dwarves do seem to be holding the wall fairly well for the moment.

Last page, I pointed out some callbacks and other things in the page and since I’ve apparently made that a thing, how about a few more? We’ve actually seen a wider shot of the space in the first panel before! We got a good look at the city from the outside way back in Issue 2, on the same page the Dwarf Commander was introduced. This time around, we get a nice sense of the actual scale of it all, as well. Speaking of Dwarves, there’s another familiar face here among the Dorae-Kos in the second panel: Specifically, the Dwarf up front and in red, this time going back to Issue 1! There’s also a bit more from this Dwarf and more details on the Dorae-Kos themselves in some of the early Prose pieces, which can be found on the Prose site in the earlier pieces under Seren and Histories.

And because we could, another comic creator friend of ours has popped up in this page. This time, it’s Sarah Roark, creator of the comic After Daylight, front and center in Panel 4…and as a Dwarf. Because putting people in as human is dumb. This totally isn’t a short joke. On purpose, at least.

In broader news, the Comics Should Be Good blog over at Comic Book Resources did a small spotlight feature on Of Stars and Swords this week! They said some very nice things and it’s worth heading over there to see the many other great comics they’ve been highlighting through the past couple of months!

Also a reminder that we are participating in Jules Rivera’s Kickstarter for Misfortune High Book 2 as an affiliate!  You can even get the first Misfortune High book AND the new one through it. Or, if you pledge at the $25 or $40 levels, you can actually get her book AND a proper actual PHYSICAL copy of the first 40 pages(Issue 0 and 1 together) of Of Stars and Swords! The only other time we’ve done a print run was extremely limited and for a single convention last year! So this is a great chance to support our friend AND get an Of Stars and Swords book you can hold in your hands!

Lastly, the usual reminder that you can now get ALL of the completed Issues, 0-4, on Comixology, optimized for tablet and phone reading through their app! If you prefer a DRM-free PDF, you can get that from our Gumroad store, which is also set up on a pay what you want system (with a minimum price).

We REALLY appreciate any and all support. Buying the books, supporting our friends, reading the comic, helping to spread the word, reviewing the comic…whatever! It’s ALL great and really helps us keep on keeping on with the comic.