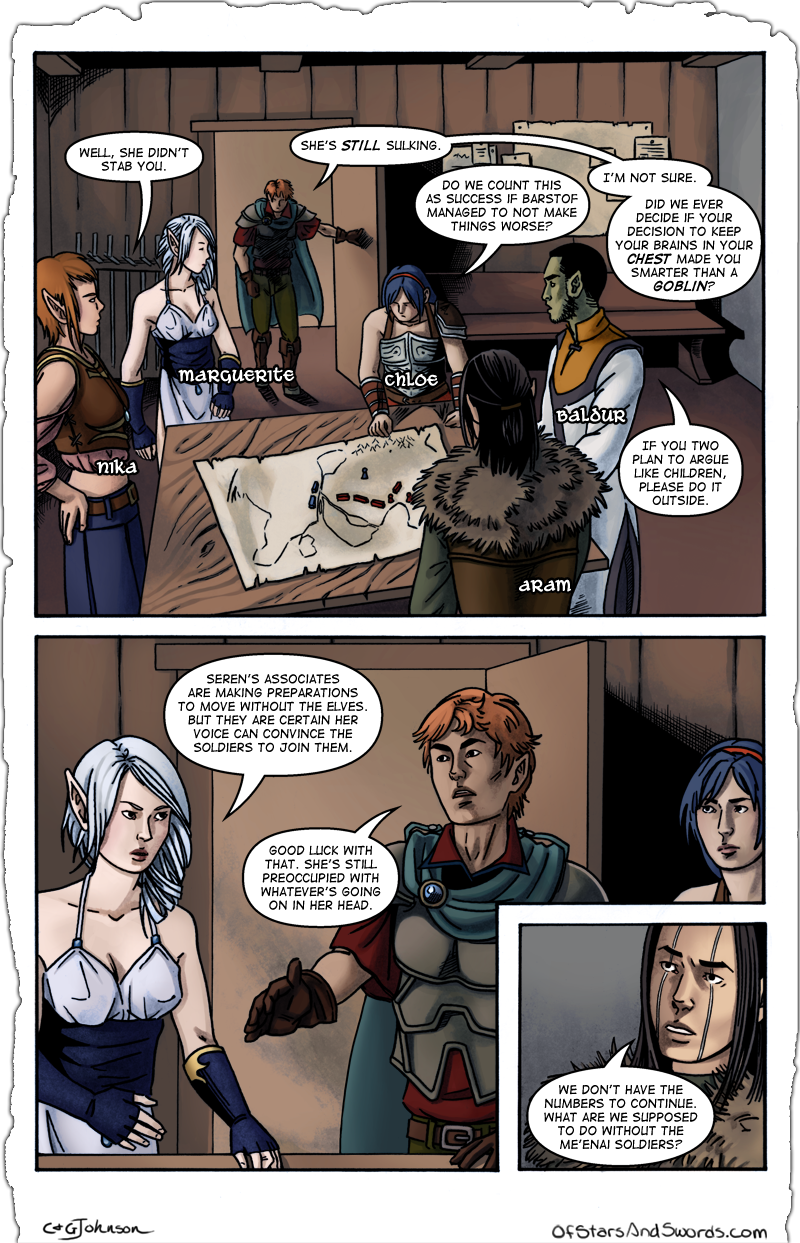 Cato did his best to follow the crowd, which was rapidly evolving into a mob. He still had no actual idea as to what Kyros had done to spark such a mob, and those caught up in it seemed to be content with simple yelling and cries of outrage. At the very least, it was obvious they were unhappy.

But this wasn’t the best time for Cato to be distracted. His younger brother was being dragged to, from the looks of it, a very public death. Even if he hadn’t come all this way to find Kyros, keeping his brother from losing his head was one of those things that just seemed necessary. Even if Kyros continued to get himself into situations that prompted cries for the separation of his head from his body…

No. No. Yell at him later. Figure out how to get him out first.

That was not going to be easy, though. After only a short time moving down the large, main street of Oriona a few of the members of the mob seemed to notice Cato’s similarity to the target of their current anger. So as not to become a new target, he had opted to drop back further, and so far that was working out. He just…wasn’t too sure how to get close again.

The street didn’t actually open up at all. It was just a continuous, straight path from the main gate to a building far on the other side of the city. He could see it now, an absolutely massive structure of marble, as the rest of the city was, but painted a deep blue. It was very likely their destination, and also likely to be a wonderful place for hundreds to witness a public execution. From the looks of things, they were maybe about five minutes from the structure, which was not nearly enough time to do much of anything.

There were numerous side streets of varying sizes, but without knowing the layout of Oriona, Cato couldn’t be sure they would help in getting around the mob at all. Even if one of them did, the mob was already to such a size that he likely couldn’t get around them as it was. Kyros always needed attention…

So Cato simply stayed back and followed, hoping he would figure out a better way out of this. His eyes scanned the area they were headed to as best he could. There was a mass of steps that led up to the massive structure, and the streets in front formed an open space large enough for a mob twice the size to occupy.

As they reached the street before the steps, Cato could see that there were others standing and waiting about halfway up. Three men and a woman, all wearing different colored robes. Immediately, he recognized them as priests from the various local temples; the colors were a dead giveaway. The way the four of them calmly stood as Kyros was dragged up the steps by a group from the mob was also another clue. No one could stand as still as a priest when a man’s life was on the line.

Kyros was forced down on his knees, facing the crowd rather than the priests, and held down by three men twice his size. He wasn’t even struggling, but apparently they wanted to play things safe.

The tallest of the priests, dressed in crimson robes, stepped forward and began to speak…in a local language that Cato couldn’t understand. Typical. The priest was probably laying out Kyros’s offense and exactly how they were going to kill him. Would be nice to actually understand that.

Cato’s eyes darted around him. He had an idea. It would, at best, be a delaying tactic, but that was all he needed right now. Ah ha!

A few feet from him, a young woman was standing and watching. They were near the back of the crowd, and it wasn’t difficult to carefully move towards her. Cato hated this kind of thing, but it was all he could think of right now.

As silently as he could, Cato removed his sword from its place on his belt. He then stepped behind the woman and grabbed her from behind, putting the sword up to her throat. Before she could react, he whispered, “I truly apologize for this, but could you scream loud enough to get some attention?”

He hoped she understood that. Cato really had no intention of hurting her, and doing this much was far more than he felt comfortable with. But what choice did he—

The woman’s elbow was suddenly driven directly into his stomach. Cato lost his grip on her immediately, stumbling back and barely managing to keep a grip on his sword as he tried to catch his breath. The woman half turned, clearly ready to strike again, but her eyes went wide when she got a look at him.

“An accomplice!” the woman called out loud enough for the entire city to hear. Every single other noise in the crowd stopped as heads turned.

Cato’s eyes met with a few hundred others, before locking with the crimson-clad priest’s.

There was a short, uncomfortable moment of silence as everyone stared at Cato, sword in hand and still breathing heavily from the woman’s surprisingly strong hit.

The priest’s arm shot out, pointing directly at Cato, and the man yelled at the top of his lungs, “Get him! We shall execute them BOTH!”

Cato wasn’t sure why he bothered to speak that, or to whom, as there were more pressing matters. For one, a mob that was suddenly all aimed at him.

So, with very little deliberation necessary, Cato turned and ran back the way he’d come.

A large portion of the city of Oriona followed.