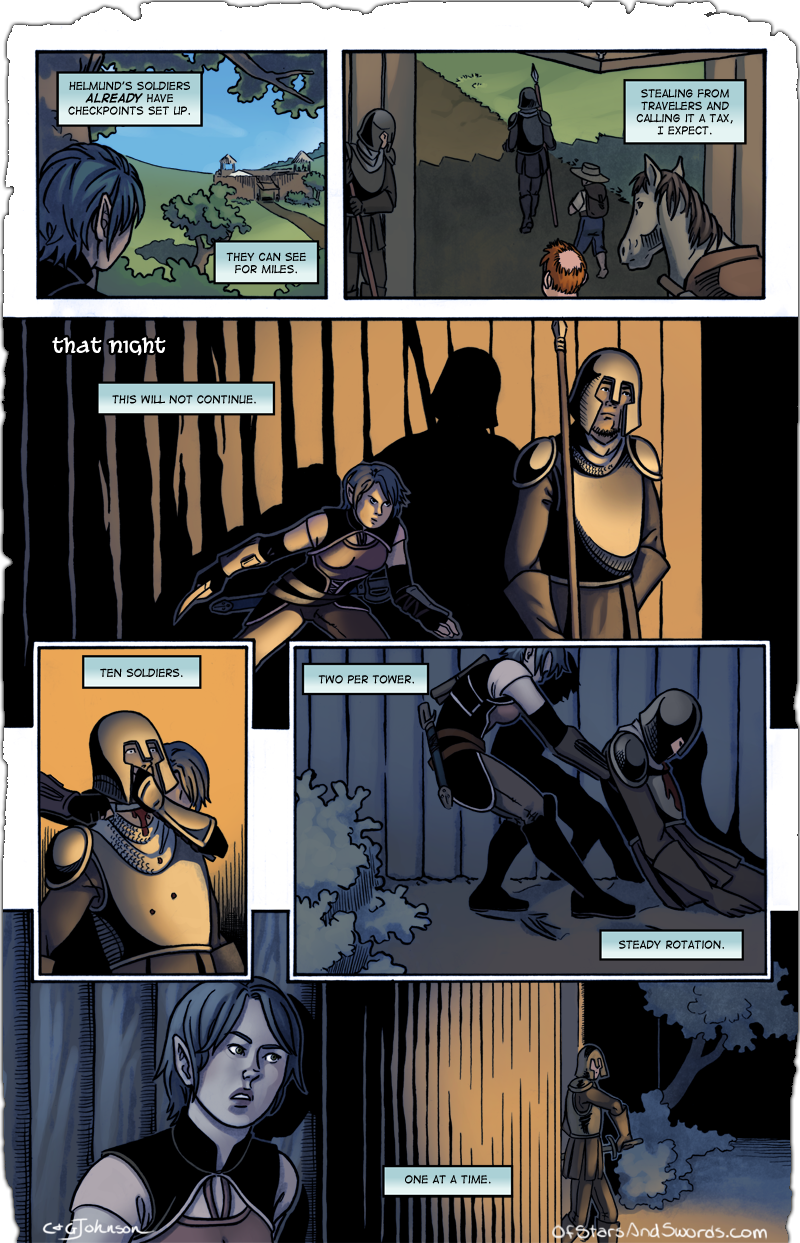 Hey, everyone! Caroline’s mostly recovered from whatever plague tried to end her and we’re back to rolling along fine again. We’re in the process of some slight website tweaks, so if things look weird it’s probably me screwing something up temporarily and panicking as I try to fix it.

If there’s interest, I’ll gladly add a bit of commentary on the pages that go up in this space. If there’s not…well, I might do it anyway. As always, though, you can find both of us on Facebook and Twitter, so let us know if there’s anything you’d like to see!

“Don’t even try to call for help,” Cato pressed the tip of his sword against the chest of the man who had opened the invisible door within the temple. It was the best he could think to say as the man looked like he was about to take a deep breath and yell, but it simply ended in a long, heavy sigh.

The man was short, balding, and wore the red robes that Cato had seen on the priests attempting to execute his brother earlier that day. There was something unsettling, however, in the way that the man just stood there, sunken eyes not acknowledging the blade threatening his life. He didn’t look worried. He looked surprised.

“They said you would come,” the man spoke in a grave, strained voice. He sounded a decade older than he looked. His eyes looked from Cato, then to Kyros, and then to Anica behind them, “You will find nothing out of the ordinary within the cellar, and I can assure you that the Watch will be here soon.”

Kyros laughed a little too loudly at that, “They’ll have a hell of a time getting in.”

“Indeed,” Anica concurred in such a way that, once again, indicated to Cato that she spoke Common perfectly fine. Cato was beginning to think he didn’t like her all that much. She hid too much for reasons he couldn’t comprehend and then played it off by trying to feign being a cute foreign girl. And she was very good at it.

Cato’s eyes looked beyond the man in front of him. A stone-walled, spiral staircase went down into faint torchlight. He couldn’t help but note that the stairwell went down to the right. The illusory wall had looked like a stairwell going down to the left, and there was no light coming up. Subtle, and probably very effective since, at cursory glance when walking into the temple’s main chamber, one would always see a stairwell down the corridor to the side.

That was when a realization hit Cato. His eyes narrowed and he carefully studied the man’s face for a reaction as he asked, “Why were you coming up?”

No one came out, Anica’s Dorae-Kos people had said. They only ever go in. But this man in red didn’t so much as blink at the question. His head simply tilted slightly to the side, studying Cato’s own face like a curious animal, “I was preparing tomorrow’s offering. Am I to sleep in the cellar all night?”

“No one comes out of this door,” Anica spoke the words slowly and deliberately, her feigned accent and trouble with Common almost entirely absent now. Was she nervous or was it something else?

But the man in red shook his head, “I’m afraid that is simply untrue, young lady.”

“Shut up,” tired of this, Cato cut the man off and nodded to the stairs, “Turn around and lead us down. Now.”

Though the older man did as he was told, after turning he gave Cato another sharp look from over his shoulder, “It is not ever good to threaten a Servant of the Gods.”

It took all of Cato’s sanity to fight back arguing that. This was not the time. In fact, they likely had very little time. Rollan was outside, yes, but he would only be able to guard the entrance for so long. They needed to get in, learn what they could, and then get out quickly. Letting this priest — if that was really what the older man was — stall them in argument and conversation would do no good.

Thankfully, neither Kyros nor Anica fell for that trap, either. Instead, they fell into step behind Cato as the four navigated the extremely narrow stairwell. It wound them around twice before depositing the group into a rather large, single room cellar. It looked like most cellars. Barrels lined one wall, crates in another. Food and wine most likely. There were wooden partitions that contained everything from more boxes to wooden desks. No windows at all meant that the only light came from torches at regular intervals along the walls, and it all surrounded a single, waist-high slab of marble in the center of the room.

The three newcomers to the room took it all in carefully, while the man in red stood with his arms clasped in front of him, still not giving any attention to Cato’s sword threatening him, “That is the tomb of the founder of our order, if you were wondering. A great man. One of the founders of Oriona, in fact.”

Kyros and Anica were walking around the room, looking for anything out of the ordinary and, from what Cato could tell, finding nothing of the sort. But why conceal the room behind magic if it was a normal cellar? No, there was something here. They could hide a door with magic, of course they could hide something else.

“What is that smell?” Kyros asked as he peeked into a barrel of something that was most likely not the source of his question.

Anica, across the room, looking into one of the wooden partitions, stopped and stood up straight. Her eyes closed and after a moment, she confirmed what Cato was thinking by asking a very pointed question, “A body entombed since the founding of the city would not still smell.”

Kyros looked over to his brother. They exchanged a short glance that gave far more information than would be expected from only a look, and the younger man went straight to the tomb in the center of the room. At first, Kyros pulled back and coughed. The smell was there. But he took a deep breath and leaned in, hand running along the marble tomb.

After only a moment, Cato’s brother said, “This is still sealed. Perfectly sealed. The smell is…”

Kyros stood up and looked at the flat slab of marble. He looked over to Cato and shrugged at it, “It’s here.”

Cato took a step forward to the man in red, shifting his sword so that it was now to the man’s neck, “Your trick didn’t work the first time, it will not work again. Remove your magics.”

The man was cut off violently as Cato threw the man to the stone floor and kicked him hard in the back before once again placing the sword to the man’s neck, “No more stalling! I’ve had enough of this city and the sooner you do as I tell you the less likely you are to slowly bleed to death down here.”

Slowly, the man in red sat up. Those sunken eyes studied Cato and found only truth. Hands came up and began to make symbols in the air, but Cato spoke up before anything else happened, “And I am no fool. Anything but removing the spell and I will remove your ability to perform these tricks.”

Intelligently, the man in red nodded very carefully. He then went back to his motions, quietly speaking words that weren’t words. A tightness in the air grew for just a moment, and then everything changed.

In the blink of an eye, the drab cellar was a dangerous and overbearing ritual chamber. The walls were lined with skulls of various sizes and creatures, vials of odd liquids, and slabs of what were very likely human flesh. Both the floor and ceiling were covered in carved runes, which were thankfully not glowing. Glowing runes were, in Cato’s mind, never a good thing. But it was the tomb in the center that had all of their attention.

It was still there, a rectangle of marble with, presumably, old bones within. But now, something rested on top. The body that lay there was humanoid. It was thin, worryingly so, and so black that its skin seemed to absorb all light that shone on it. The head was large, with a pair of jet-black eyes staring lifelessly up at the ceiling and a thin mouth only visible due to the shift in tones of black. It wore no clothes, but there were no features that distinguished its sex. And it’s chest was open from the neck to the stomach.

All stared at the clear source of the horrid smell. None of them could find words for what they were looking at, as it was like nothing they had ever seen. It was…wrong. It had no features. It just was, and something in all of their minds said that it Should Not Be. And yet…

The man in red very carefully stood, his eyes not leaving the dead creature, and he spoke very slowly, “Now you look upon the Doom of us all.”