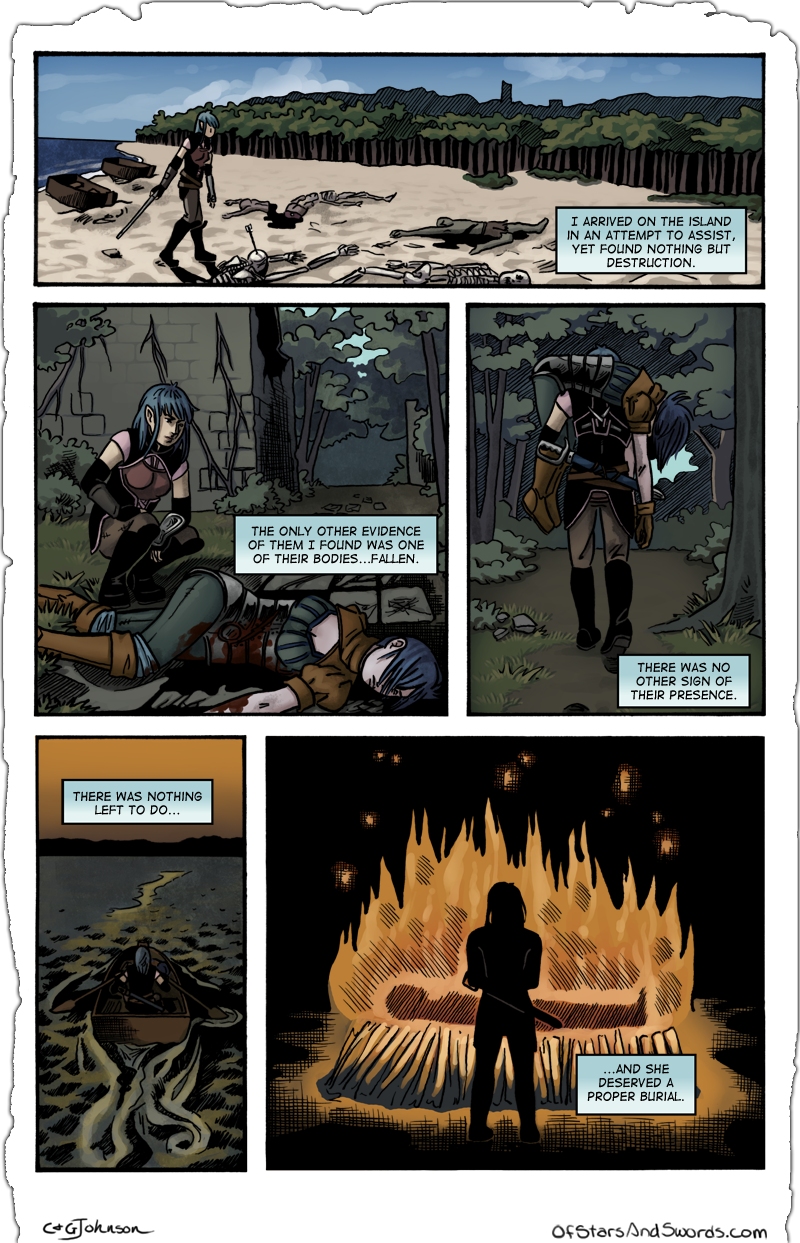 Page Sixteen: One Step Behind

The Unification, as told by King Tyriel, leader of the Elven Kingdom from u.-76 to u.314. Account recorded in u.23

Our Gods decreed we were the first ones to walk this land. Created before time was time, we have been the caretakers of the forests and the land since everything began. We have witnessed the birth of many others through time, even helped to nurture some, growing them into civilizations of their own. The Gnomes that now travel the land would be simply sprites and mindless fey if not for our influence.

But the last five hundred years has taught our people that even a decree from our Gods can be twisted, for there are more Gods in the Heavens than those that created our people. The Heavens are fraught with evil, twisted entities that call themselves Gods. They skulk in the dark places of the worlds, hidden from eye and mind alike.

And though we were first, this did not last long. The priests and bards tell you tales of other Gods growing jealous at our creation. So jealous that they made their own life, but lacked the light and greatness of our Creators and instead made the Orcs and Goblins and other beastly creatures that still torture the land. While this is likely to be true, it cannot be the whole story, for these creatures came into being millenia after our own birth, and our recently vanquished foe proved to be much, much older.

None that live today can forget them. It has been twenty years since they were driven into darkness, yet I close my eyes and I still see the twisted things. But you who read this may be hundreds of years removed from the war, spared the horrors I and countless others were born to.

So where did they come from? To look at one of them was to look in a twisted, broken mirror. Elves, almost, but wrong. Whatever dark being that created them may have taken our own people and corrupted them, or simply not understood how to put the pieces together. And somehow, these mockeries of our own being remained hidden from us for so long, waiting at the edges of the world for the right moment.

Five hundred years ago, during the reign of my grandfather, Kyrin II, they seemed to decide the time was right. From the sea and even from the sky, they came as conquerors. Kyrin II was killed defending his home from them, but his family escaped. My father, Celaen the Shining, was crowned on the battlefield. He led the fight against the abominations until his own death four hundred years later, after which leadership of our scattered people fell onto my shoulders.

By the time my reign began, our people were nearly broken. The enemy, whose name we still do not know to this day, had taken our homes and our land, driving us all to the edges of the world in tiny pockets. But having taken to the sea to escape, we found others.

We had always known that other Elves lived across the seas, even traded with them, but we did not know of so many other creatures that walked the distant lands, all ravaged by the abominations as they made their way north, to our home.

It seemed that not only were we on the brink of death, but so was the world. Yet, scattered and weakened as we all were, I came to realize that there were, in fact, a great many small pockets of people. Yet while all had been ravaged by the abominations, the enemy only stopped to occupy our land in the north, clearly their destination.

While this seemed to confirm that our stories were true, and life did, indeed, begin in those northen forests, it presented another, more interesting option. The other lands were no longer held down and were beginning slow recoveries from the attacks they had suffered.

But the world was growing dark. Days grew shorter. Powerful, evil magics at the heart of our home were corrupting the world itself, and it would not be long before the darkness might end all that lived save for the abominations.

I travelled the seas for ten years, gaining the friendships of survivors all over. And as I did so, I began to gather forces. In all the lands I travelled, Elves joined my fleet in droves. Their leaders murdered, they looked to me as if I had been their ruler for all of history. It is a testament to our people that we should respect distant relations as if they were our own, but this was not all that I did.

Far to the west, I bartered with the Spirit People of Hirokan and secured a great many swordsmen. In Fusang, I acquired siege equipment and hundreds of soldiers. To the south, across the islands of Orincia, the young Humans of the land came to us with ships of their own, claiming their Gods on the Mountain had called for them to assist me. In the desert land to the east, the people of Geb sent soldiers and warrior priests alike, fearing what the magics would do to the entirety of the world. And in the ice covered lands of the north, wild men pledged themselves to us in the name of their warrior Gods.

I had an army. One dedicated to taking back a land that was not home to the majority of them. The Gods of others saw the danger but could not directly intervene. Instead, they commanded their peoples to save the heart of the world itself. Once all was organized, we returned to our ancient home.

Landing across the entirety of the continent, thousands upon thousands of soldiers stormed a twisted and broken land. The abominations had, in only a few years, killed the land itself. Where forests and farms had once been, only dead soil and strange, soot-black structures remained. Towers scattered the continent, watching over it all, and as our forces moved inland, we found more than just the abominations.

Our enemy had taken countless prisoners through the years, and soon we found why. An army faced us at all angles, but not an army composed of the invaders. This new army was of our own people. Elves, once-true Elves, dead for years but brought back by dark magics. Armies of undeath roamed. Even the abominations had turned to this magic, their generals ancient beings of death and darkness.

Yet together, we fought them back. It took half a century and so many deaths that counting them is impossible, but we pushed them off of the continent and our land. Yet we could not end them completely. Using magics, they escaped to various points of the world. The largest host fled south, erecting a giant wall of magic that we could not pass. It divided the world.

The rest we drove onto a small island, their last stronghold. I fought in the final battle on that forested island, amongst the obsidian buildings, and slew the general myself. Yet upon leaving, my unease at such a victory caused me to command our greatest mages to seal the island off completely.

And then, I found myself looking upon a land that, while ravaged, was free.

Before petty squabbles could begin, I called all the leaders of all of the peoples to a single table. Thanks were given and a treaty was signed. Should the abominations show themselves again, all would return to fight them back.

We called it Unification.

It seemed a fitting moniker.