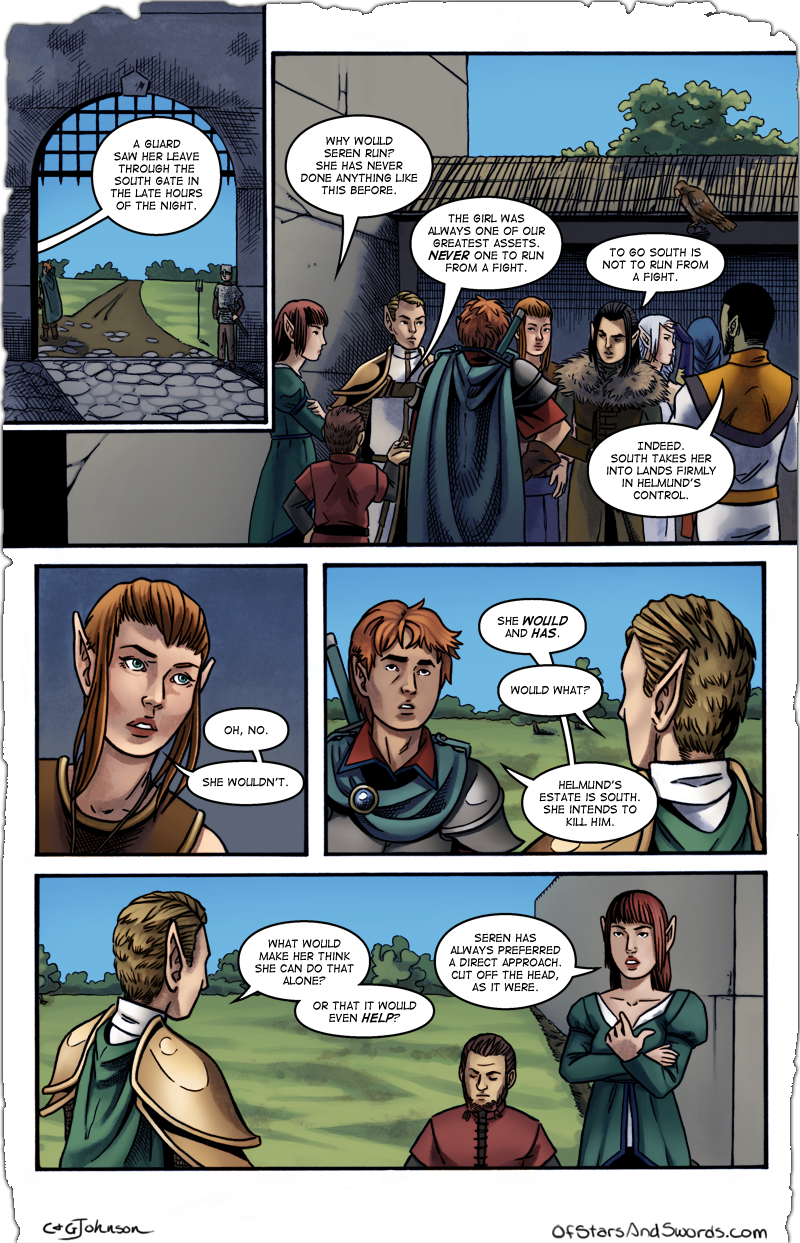 The section of Oriona’s underground that Anica and her friends used as a safe house was about what Cato had expected. Dark, dank, and despite the fact that the tunnels were not a sewage system, it smelled horrid. Cato was especially not a fan of the uncomfortably low ceiling, and all the rooms seemed a bit too small for the amount of crates, barrels, and wooden furniture within them.

After only a few minutes within the offshoot of rooms near the main tunnels, Cato was sure that this had just been a series of old storerooms that had not been occupied by anything but dust and rats for at least a decade. In some ways, it was fitting for what he was learning about Anica and the others she had come to Oriona with.

They claimed to be part of a group called the Dorae-Kos, which meant nothing to Cato. This surprised them and their attempts to enlighten him did little but cause him to shrug more. Apparently, the name came from an alliance of various peoples a thousand odd years ago to fight back some ancient evil. But really, didn’t all self-important groups claim to have names with similar origins?

Cato didn’t voice that little thought, however. For some reason, Kyros was fascinated with it all. Admittedly, Kyros had always loved the stories their father would tell of heroes that climbed mountains to defy the Gods. Of course a tale of ancient evil and a group attempting to live up to that name would get his attention.

To tell the truth, Cato’s real interest was not in history, but completely centered around Anica, her companions, and why, exactly, they’d come to Oriona. He didn’t like mysteries, especially when they saved his life more than once and then didn’t ask for anything in return. Cato wasn’t sure he trusted these people in the first place, and the way they skirted around questions about themselves, specifically, did nothing to earn his trust.

There were only five of them, including Anica. A tall, darker skinned man with odd facial markings who claimed to be from the deserts of Geb, a larger landmass further to the east. The man’s name was not given, and he simply stood in the back of the room, carefully watching Cato and his brother. Though he wore lighter robes that were clearly tailored to look local, the man would never blend in. They also did nothing to hide the fact that he was there to make sure neither Cato nor Kyros tried anything. He didn’t look armed, but then again, he didn’t really look like the type to need a weapon.

The more talkative of the bunch were a pair of halflings, Tal and Varo. They were either brothers or cousins or friends depending on the exact moment they were speaking. Whatever relation they were, the pair seemed to be the brains of the bunch and claimed to be the ones who organized the investigation in Oriona in the first place. They claimed to be from Cyronell, to the north, and to be in near constant contact with the leadership of the Dorae-Kos there. Of course, with the way they kept repeating that, Cato had his doubts.

Then there was another man, Rollan. He looked local and was built so strongly that Cato was fairly sure the man could have been the very person that carried all the marble that built Oriona. It was amazing that the wooden chair held his weight, especially when he spoke in a voice that seemed to shake the walls themselves. But he seemed a good man, concerned more about whether or not Cato had harmed any innocents in his earlier sprint around the city.

And finally was the oddest one of them all, and elf calling herself Pel. She was so slight of build that Cato was amazed she could even walk. But there was a dangerous look in her eyes, and it made him uncomfortable. Elves were an odd species, and not terribly common in Orincia so Cato had little experience with them beyond stories that he didn’t trust.

“Really! I didn’t see anything! Just a bunch of people in robes doing something that looked religious!” Kyros had been saying that in various forms for the last ten minutes, and yet none of the others seemed to believe that he could be that unobservant.

But Cato was growing tired of the repeated back and forth, “You obviously have something in mind, so stop this nonsense and just tell us what you think is going on!”

Everyone turned to look at Cato, somehow surprised that he was annoyed at them getting no where. He let out a heavy, annoyed sigh and stared up at the far-too-close stone ceiling, “You came here looking for something. You think Kyros found it. He doesn’t know what he found. So just tell us what you think he found so we can get to the part where we understand why he was nearly killed.”

“The mages here study the Wall,” one of the halflings, Varo maybe, was the one to answer.

Cato rolled his eyes dramatically enough so that everyone could see he was not amused by this, “And swords are good tools for stabbing. I am so glad you are here to save the world.”

The other halfling, Tal, stepped forward and glared at Cato from under a ridiculous mop of red hair, “Do you never think that danger might lurk behind a wall of magic that cuts off the entire southern ocean?”

Cato just shook his head, “And monsters wait in the sky behind the moon. I also hear that dragons wait behind clouds. Do you plan to lecture me with stories for children or are you going to get to the damned point? Every idiot knows the mages here study the Wall! It’s why they’re here in the first place!”

Tal continued to glare, but did nothing else. He was pulled back by the other halfling as Anica leaned forward in a chair from the other side of the room, “We are here because of rumors.”

“You told us this part, too,” Kyros was finally starting to get tired of the running in circles, too.

At least Anica acknowledged that by nodding before she continued, “Oriona is tightly controlled city. We have learned little beyond the rumors that brought us here. Until you got here, of course.”

“And I still don’t know what I did!” throwing his hands in the air in frustration, Kyros got to his feet and turned to his brother, “Why couldn’t you have just let them execute me?”

“Mother would be displeased,” Cato shrugged and looked to the others, “So just rumors. What exactly are these rumors?”

Pel, the elf girl standing in the shadows on the other end of the room, was the one to answer, speaking in an uncomfortably calm and quiet voice, “The mages of Oriona have found something. The Wall’s secrets have opened to them. They consort with dangerous forces thought lost to the world.”

“And vague enough to mean anything,” Cato shook his head again and got to his feet, “We appreciate the help earlier, but I think it’s time we leave. I don’t like to stay in a city that wants my head any longer than is necessary.”

Before he could turn to leave, Rollan was up and moving far faster towards Cato than looked possible for the man, “You will not leave.”

Cato was about to comment on the threat within that, but Anica was also up now, walking over and clearly trying to be diplomatic, “City still looks for you both. They will find you if you leave now.”

“Then we wait until night,” Cato said as he looked to the door that was now beyond where Rollan stood, “I’m not going to sell you people out so stop being so damned touchy.”

“We require your brother’s assistance,” one of the halflings responded, but Cato wasn’t looking and couldn’t tell their voices apart, “He found a way into an inner section of a temple. We have observed many enter, even sent a contact in, but never have we seen anyone leave.”

Kyros’s eyebrow went up, “You guys don’t know how to use a door?”

“The door is protected,” Anica said as she began to pull Rollan back, “Yet you were able to enter and leave through it.”

“Getting in was easy. Those robes they wore hide your face and they just let me right in,” Kyros was, as always, not considering caution in dispensing the information, “They figured me out when I was down there, and I just ran back! Nothing special.”

“That is what we mean,” Anica sounded frustrated, but she was clearly trying to get something across, “You are the only one we have seen leave through that door. What do they do through it? Where do they go after?”

Finally, Kyros seemed to understand. He thought on this for a moment before shrugging helplessly, “I uh…didn’t see any other way out.”

“There must be,” Pel’s voice gently and uncomfortably drifted across the room, “As well as more to how you found a way in. There is more to it than the robes. Do you think we had not tried that? It took weeks to get one man in, yet you tell us that you simply walked inside.”

“Can we please not start this circular argument again?” Cato pleaded, hoping to interrupt his brother once again claiming that he didn’t do anything special. Kyros was an idiot sometimes, and it really didn’t help in times like this.

Cato watched as Pel’s gaze shifted carefully over to him. It was an uneasy few seconds as they attempted to read one another, and then she spoke again, “We will go back tonight. Your brother will show us everywhere he stepped and everything he touched.”

“The night after he was caught inside?!” Cato looked over them all, hoping to see they understood how stupid an idea that was. Only Kyros’s face showed any understanding, so he went on, “There will be guards everywhere! Or they’ll have moved everything!”

“Which is why we cannot waste time,” Anica attempted a smile, but it was as fake as her failing to speak Common properly, “If they will kill at the mere entrance by an outsider, then we must know what they have found. I know you do not believe what we are here to find, but if there is even the chance that we are right, would you risk running away while a great evil grows here?”

Cato didn’t need to wait to answer that. The part of his mind that tended towards recklessness and stupidity was well under control now, so he looked at them all and said firmly, “Yes!”

The big man in the back had remained silent. But after Cato’s declaration, the man was no longer simply leaning back against the far wall near the torch. He stood up straight, having to tilt his head so as not to hit the ceiling, and spoke in a slow, deliberate way, “You will not leave here. You will assist us. You will leave this place only two ways. Either you will assist us tonight, or you will die here.”

Once again, Cato was reminded why he never liked working with secret organizations.