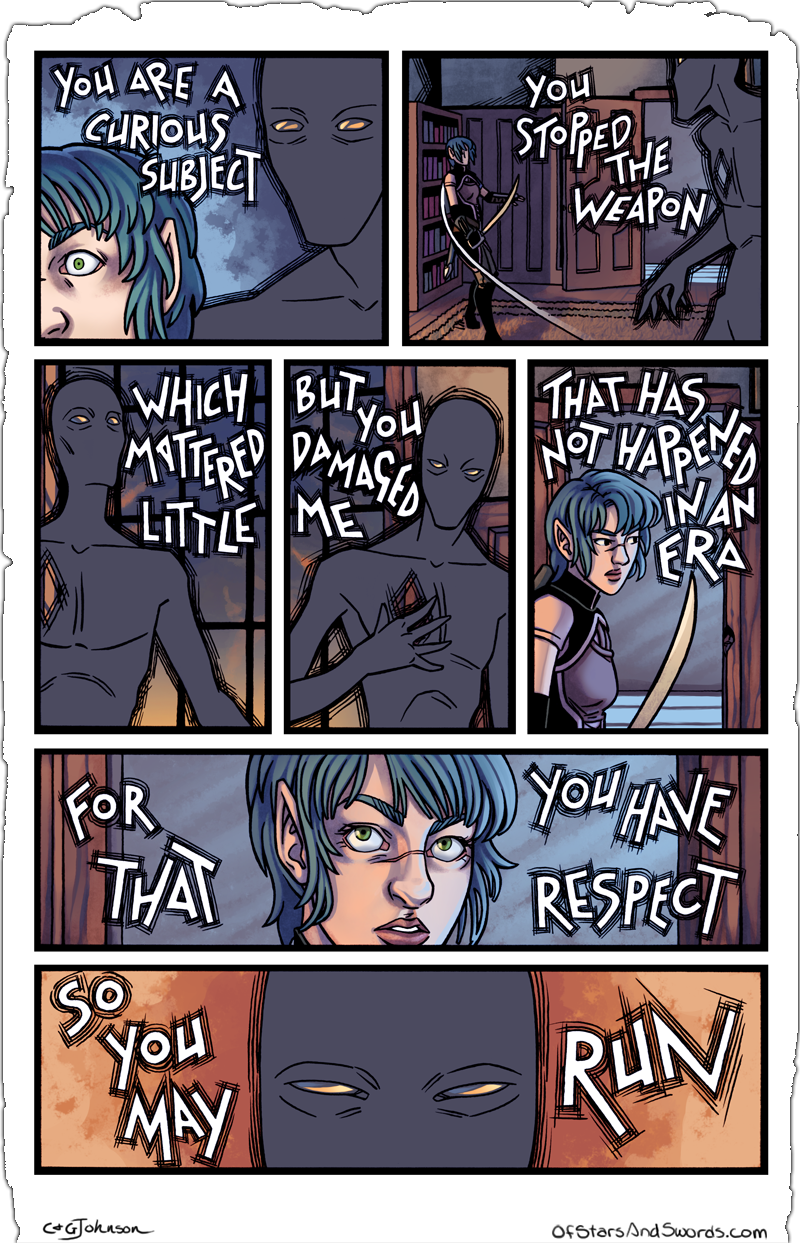 Seren REALLY should have been paying more attention to this room. These guys are creepy enough when they don’t suddenly appear over your shoulder. But I’m not sure…is it worse if they sneak up on you and kill you or do what this one is doing? Seren might not have let the Mad Lord do any monologueing, but this thing seems okay with both doing it AND keeping Seren on her toes.

To be fair, though, can you blame her?

As you can see, it’s only the inks for now. Colors ARE coming, but they’ll hit next Wednesday. Speaking of which, last week’s colors are done, as well, and the page is updated! There will, sadly, be no NEW page next, June 18, just the final colors for this one. Also, the week after that, June 25, there will be no new page, either. That’s going to be our off week and then we’ll be back on track with regular updates on July 2nd.

Why? Well, a mix of moving and HeroesCon June 20-22! As mentioned before, we’ll have special Of Stars and Swords Ashcan comics there as well as new flyers to give out. But since we won’t have a table, you’ll have to find us or be found by us! Keep an eye on our twitter feeds as we’ll be updating as best we can.

Speaking of social networks, I now have a Tumblr! In addition to the usual random stuff to share on Tumblr, I’ve started posting small panel previews for Of Stars and Swords and some art from upcoming projects as well. So…follow me there if you’d like!

Lastly, it’s time for the weekly reminder of ways you can catch up on the comic and/or buy it in digital form to have elsewhere/support us if that’s your thing! The sidebar buttons that link to the start of each issues, so it’s easy to jump to where you need to be if you’ve started reading from somewhere else or just want to keep your place! Also,  you can get ALL of the completed Issues, 0-4, on Comixology, optimized for tablet and phone reading through their app! If you prefer a DRM-free PDF, you can get that from our Gumroad store, which is also set up on a pay what you want system (with a minimum price).